That sir is a monkey

When you're a known motorcycle person people send you MC related stuff when they come across it. Very seldom do I get articles on "101 way to die on a motorcycle" and I thank my friends for that. This is not one of those times.

Paul, a car guy, sent me a short article about sidecars at the Isle of Man TT he found in "Road and Track" subtitled "Dexterity, faith, and madness." It asks the question, "Who's the bravest rider at the TT?" He was stunned to see the "side car guy" hanging off, dragging a shoulder. I can't say I totally disagree with him or R&T. The Supersport and Superbike classes carry mind bending speeds and deserve top billing but the Sidecar class is quite the spectacle.

R&T had this clip from the 1961 TT. My guess is this is Paul's first exposure to sidecar racing.


I took it upon myself to bring him up-to-speed.

Map of the week.

Coop of Coop's Corner fame managed to string some dirt roads together between Prescott, and Pepin WI. I've ridden many of these roads and fished a handful of the streams. The majority of the roads in this area are paved so he managed to get way off the beaten track. The map doesn't have enough detail to tell you how to recreate the ride, but it'll let you know where to look.

Coop was kind enough to post a screen shot of his breadcrumbs AND some video/ GPS data in his post JeffRide.

Under the bridge downtown

East and West River roads in St Paul and Minneapolis have always been a go-to route for me. This evening I kept it simple, stopping for a photo-op under the 35W bridge.

Additional attractions include hiking along the Mississippi River and its backwaters at Crosby Farms Park, Sea Salt and a waterfall at Minnehaha Park, and Third Thursdays at Blue Cat Motorcycles. With the exception of Sea Salt, I won't get into "where to eat in St Paul/ Minneapolis," you'll just have to get out there and find your own spots.

Slow down and read the street signs

These damp spring mornings are some of the best times for a ride. It's been 6 months since I've felt anything resembling humidity and it felt great to just breath it all in. I set out intending to ride some of the little roads in and around River Falls, WI with a stop for gas and coffee thrown in there.

This was a slow down and read the street signs style of riding, often best done solo. It's really the only way to find the "Alligator Slide Roads" that you'd otherwise miss. Some of them, like High Ridge Rd., just end in the woods somewhere. Other turn to gravel or forest lanes, not a problem for anything smaller than a K1600GT. Any road with "Coulee" in the name is worth exploring.

I was going a little fast and saw 109th street a little too late to slow down safely. When riding slow, which is the same as riding the speed limit in most places, traffic can sneak up on you in a hurry. It's always better to slowdown and whip a uie than to jump on the breaks and get run over. It'll give you an opportunity to put those slow speed MSF skills to use.

This turned out to be a blessing; a quarter mile down the road I saw a new hike in fishing/ walking access for the Kinnickinnic River. The "mirror - slow - uie" procedure was put into action and soon found myself standing at new Kinnickinnic River Land Trust access sign. At this point the ride quickly became a hike, one of the benefits of riding solo.

The access is on FF, just south of River Falls half way between 35 and F. It's about a mile hike in that cuts through two farm fields before heading down the bluff into the Kinnickinnic River valley. It turned out to be great for bird watching as spring is in full swing. Hiking down int the valley, the orioles were putting on a show in the treetops and a nearby grouse was drumming. I always feel the grouse drumming before I hear it and have to stop in my tracks to verify the source. Across the river a Pileated Woodpecker sang its ancient song.

The embedded Google directions don't work as well as I'd like them to. Here's the screen shot of the route. 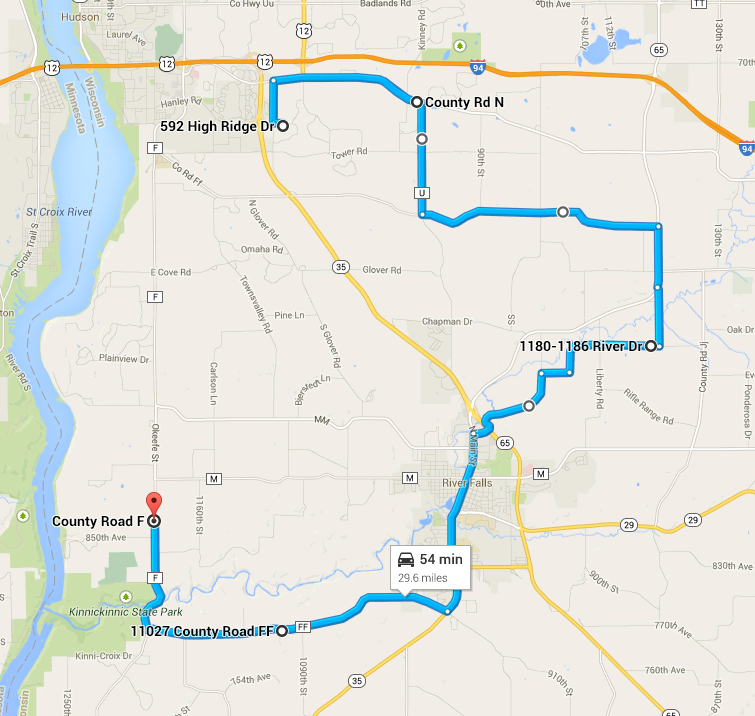 Posted by Jason 2 comments:
Email ThisBlogThis!Share to TwitterShare to FacebookShare to Pinterest


Posted by Jason No comments:
Email ThisBlogThis!Share to TwitterShare to FacebookShare to Pinterest
Newer Posts Home
Subscribe to: Posts (Atom)