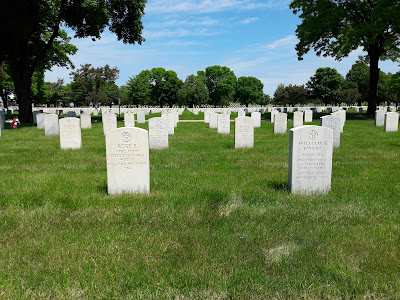 Acres of white head stones.
Many long lived individuals, many tragically short.
All served a mission greater than their selves. 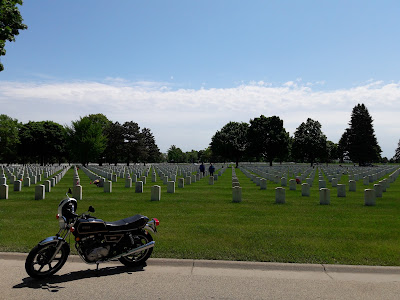 I've never served in the military but I do work for the state.
It's tremendously fulfilling to serve the people of Minnesota in my own small way. 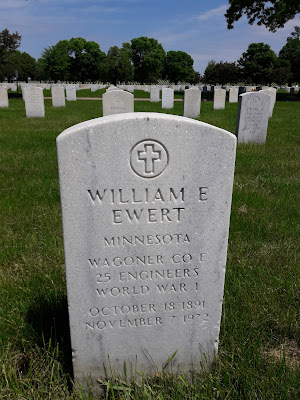 No relation that I know of but since I was there, figured I would look us up.
It's pretty amazing to see your name in a place like this.

Mrs. North: "What do you think about all day with no music in your helmet?"
Mr. North: "You guys. Nothing. Everything. Oh but there IS music, just not a radio."

This was the conversation just prior to setting off for three days in the saddle, two solo days and a ride with my Dad and brother (on his new Honda NC700X).

The trip started the Monday before when I rolled the Triumph out only to find a nail in my tire, the first in many years. I was able to plug it and ride into the nearest shop for a replacement. Amid the chaos that is spring time at a dealership, Tousley Motorsports was able to source a RoadSmart II for a good price and install it. I quickly filed that expense under "dues paid" and moved on, happy with my new tire.

Saturday started out with a quick mountain bike ride and some grocery shopping with the family. The birds were chirping and the leaves were just starting to pop. The plum trees were in full bloom, standing out against the grey forest. By Monday, the leaves had fully popped and the white blossoms were lost in a sea of fresh green. 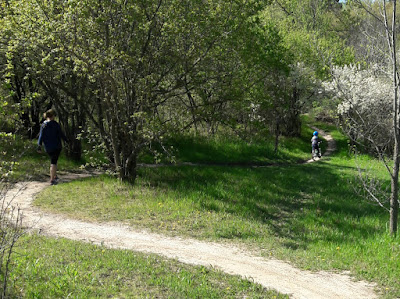 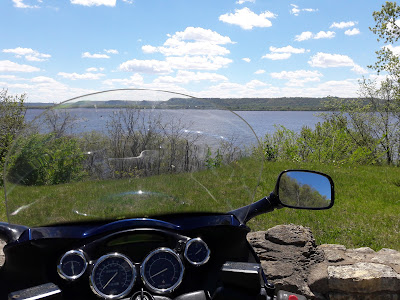 On the road by 1:00. 70 degrees and sunny.
First stop, a quick view of lake Pepin and cotton ball clouds. 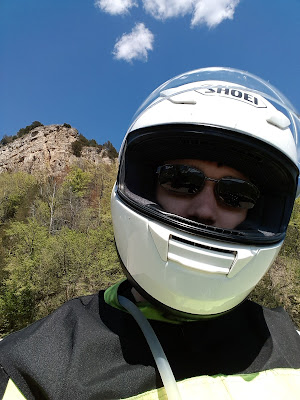 Selfie with limestone.
An ancient sea bed in the middle of the continent. 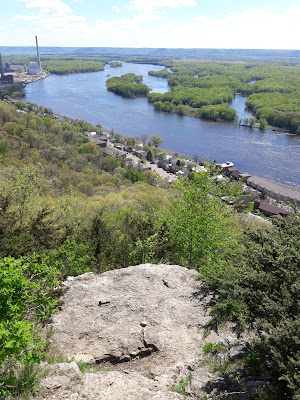 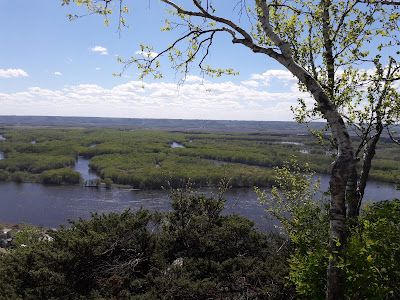 More Mississippi River backwaters.
I met a fellow rider and owner of a new Yamaha from Eau Claire.
Motorcycle people are good folks. 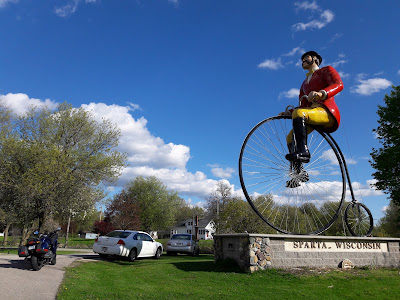 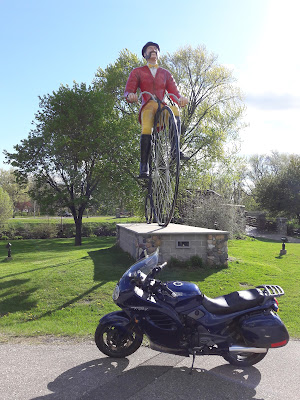 A pair of proper English gents.

From Alma, I took some of my favorite county roads down to Sparta. County roads E - EE - N - D. That little detour up N is worth every second. I didn't have a ton of time to explore county roads so the remainder of the trip was spent on state highways (71 -33 - 60). 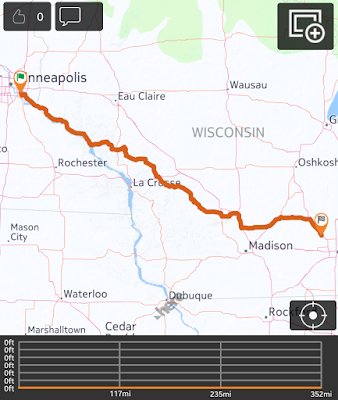 The sun was starting to shine through the windows when I woke up on my brother's couch. A small dog and child came to visit me in the wee hours of the morning, a rare morning that I get to spend with my nephews. I love those little buggers. Each one is cool and interesting in their own way. After some coffee and catch in the backyard the boys and their mom were off to church.

It was a sunny 45 degrees when my dad pulled up on the Tiger, ready to ride. I think we were all excited to spend the day bombing around Wisconsin together. I'm trying to remember the last time the three of us rode together.

There is a "young family" stage of life were nobody is really sleeping, you're just getting going in your career, and money and time are both tight. It's a special time but being Atlas is both rewarding and relentless. (and let us not forget Mrs. Atlas, the true pillar of our world)  This doesn't leave much in the tank for hobbies or long stints away from home.

The work is good and the ride, triumphant.

I think the new bike had bout 100 miles on it when we set off. My brother has had a handful of bikes over the years and I think he really enjoyed being on two wheels again. His job kept him working crazy shifts and most weekends. Now he's getting three out of every four weekends off and I think he's just starting to figure out what that means. (It's amazing what you can get use to, or not.)

I don't think my dad ever gets off his bike but he's retired and can do things like fly to Texas and rent a BMW. (does anyone have an R1200GT for sale?) He's a great pack leader and it was fun to ride behind him and my brother. He's been riding these roads for decades and took us on great little county  two lane roads. It's good to know a local.

It was a real treat to spend the day chasing my dad and brother around some of their old haunts. We rode at a relaxed pace and the ride was uneventful. All the riders and machines preformed excellently, navigating a small handful of technically challenging curves but mostly state highways and flowing back roads. 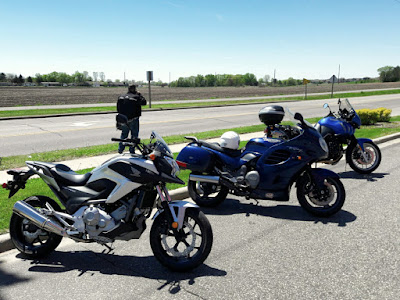 The justification for this ride was to participate in the Slimey Crud Run outside of Madison, Wisconsin. The ride's motto is ride fast, ride short. (or something like that) We did neither but had fun just the same. It's a loosely organized ride with a start and an end but no route. This year was well attended with bikes from all walks of life. The real treat for me is seeing all the old bikes and the characters that keep them going. There's a real chance that you could get behind an old Norton or Guzzi on a twisty back road. 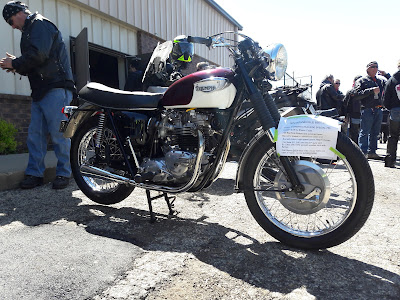 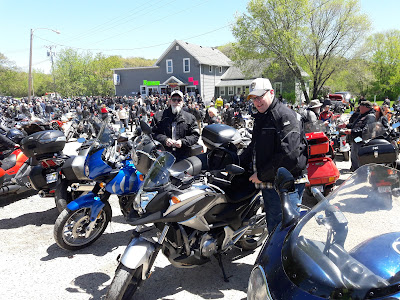 The Ride North Crew at Leland, a happy bunch. 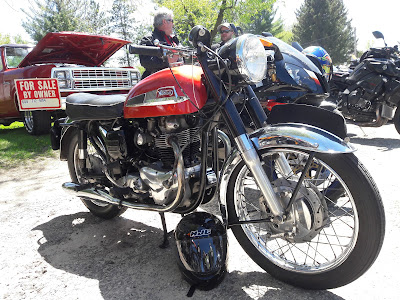 Norton Atlas 650
(Has there ever been a better name for a motorcycle?) 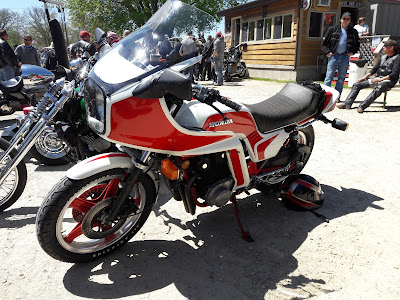 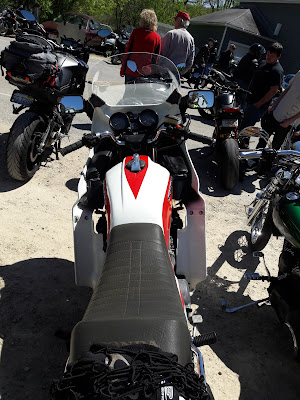 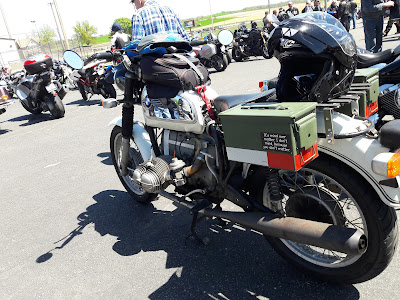 Something about this bike says, "ride me" 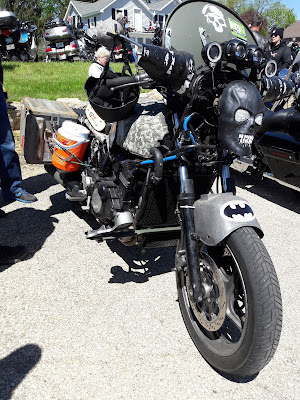 What happened to Connie?!? She's changed. 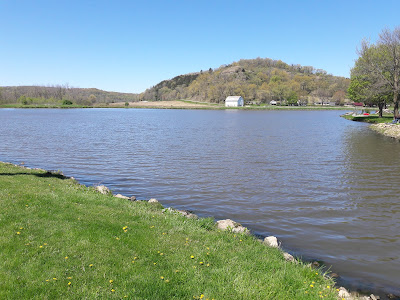 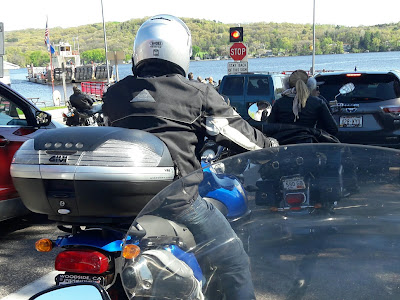 Ferry crossing on the Wisconsin river.
You're never too old for your dad to buy you ice cream at the Merrimac ferry crossing. 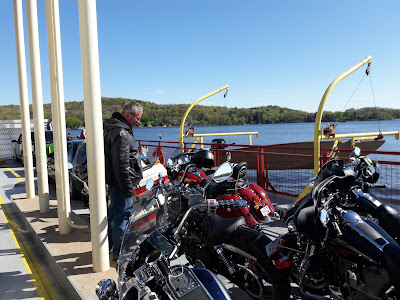 If this goes south, we have a john boat and some duck decoys. 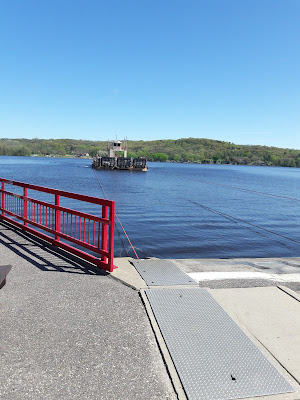 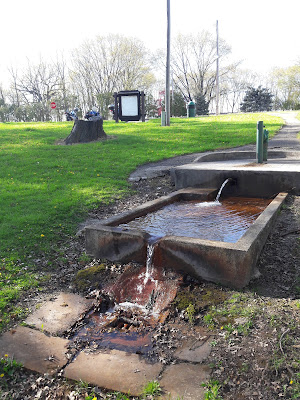 A rest stop on 60 along the Craw Fish River.
This is an artesian well and runs 24/7.

We stopped at On The Rocks in Neosho, WI for dinner and to congratulate ourselves on a job well done. The "dining room" hangs out over the Neosho Mill Pond and the Ruben came with a slab of corned beef. It's good to know a local. 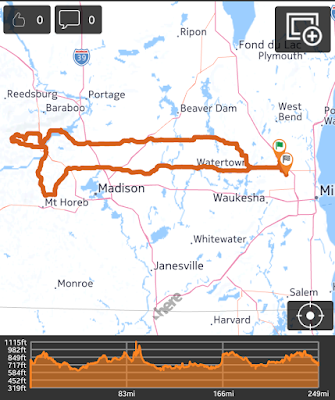 I spent a little less time with my folks than I'd like but there was a child who would be waiting for me to pick him up from daycare. If I had all day to get there I would have made my way back to The River, but this trip would be made at speed and in a straight line. (41 - 33- 94) 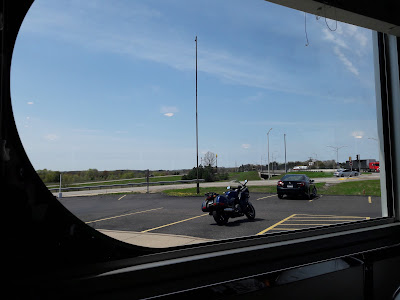 Stopped in at Moe's Dinner for lunch and a rest.

I can ride all day and feel great but four hours on the interstate is exhausting. It's deceptively difficult, things can get monotonous while you're cruising at 75 miles an hour. So, you need to come up with games to keep you on the ball. Now that the limit is 70, you'll have some people driving 85 and others doing 65. (plus wind and trucks and the possibility of deer) It's good to take breaks. 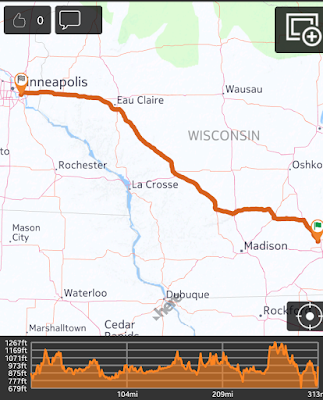 I made it home safely and with plenty of time for pickup. A full fifteen minutes before I had to be anywhere.