Anyone who's paced around a nursery for nights on end will understand how poems like these are written. It seems like such a long time ago but I also feel like I'm still catching up on my sleep. 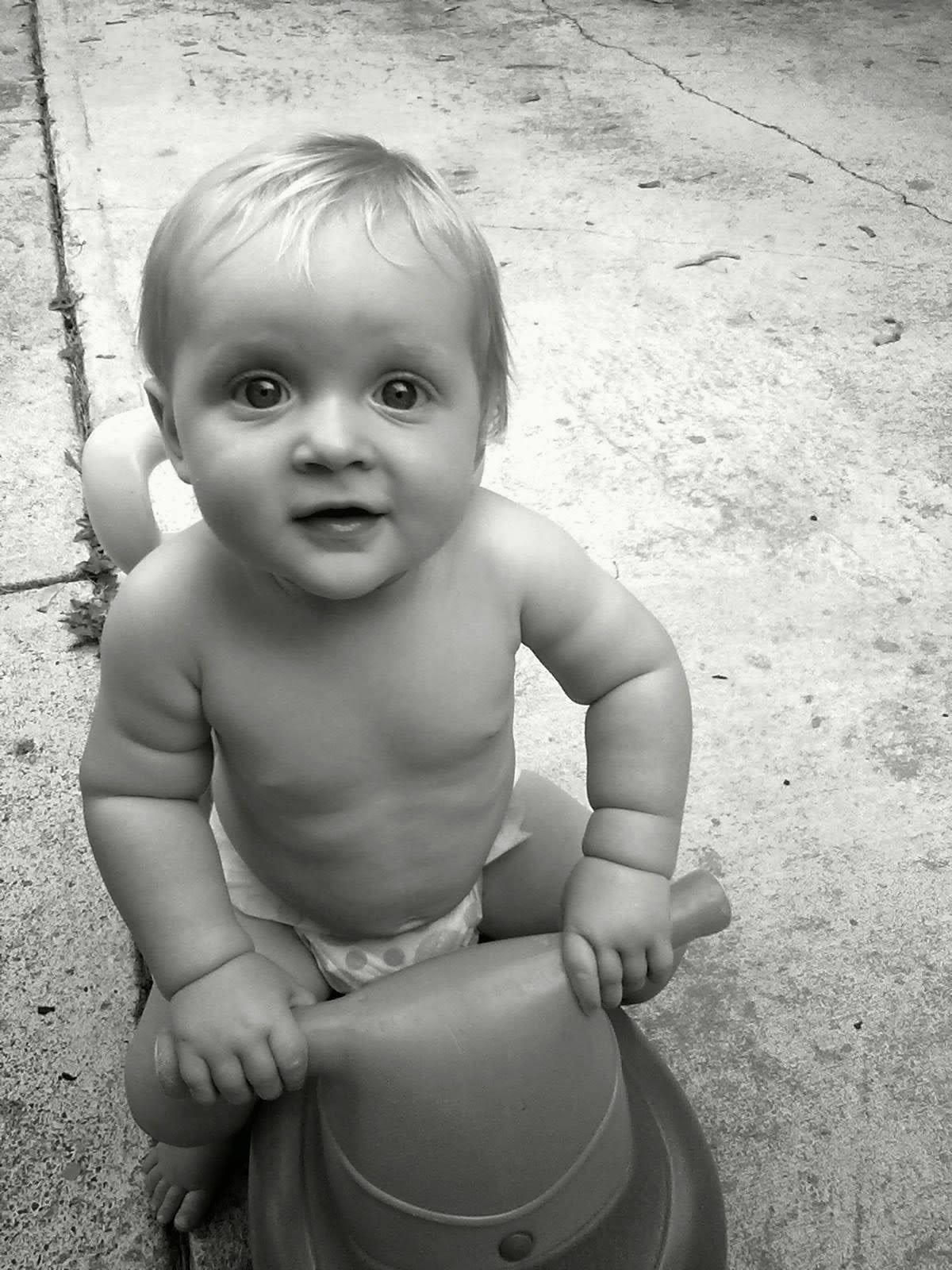 Hush little baby don't say a word,
Dady's going to buy you a Thunderbird.
And if that Thunderbird don't start,
it only takes an hour to tear apart.
And if we lose a piece or two,
we'll strip it down and paint it blue.
We'll paint it blue out in the shack,
then we'll paint the chrome parts black.
If the bike still doesn't start,
we're going to take the carb apart.
We'll clean it up and put in bigger jets,
and make sure that the idle's set.
Then it will be faster than a BSA,
and you can be a hero for a day.

I've been very good this year and... who am I kidding, this is just an excuse to post pictures of motorcycles. Enjoy. 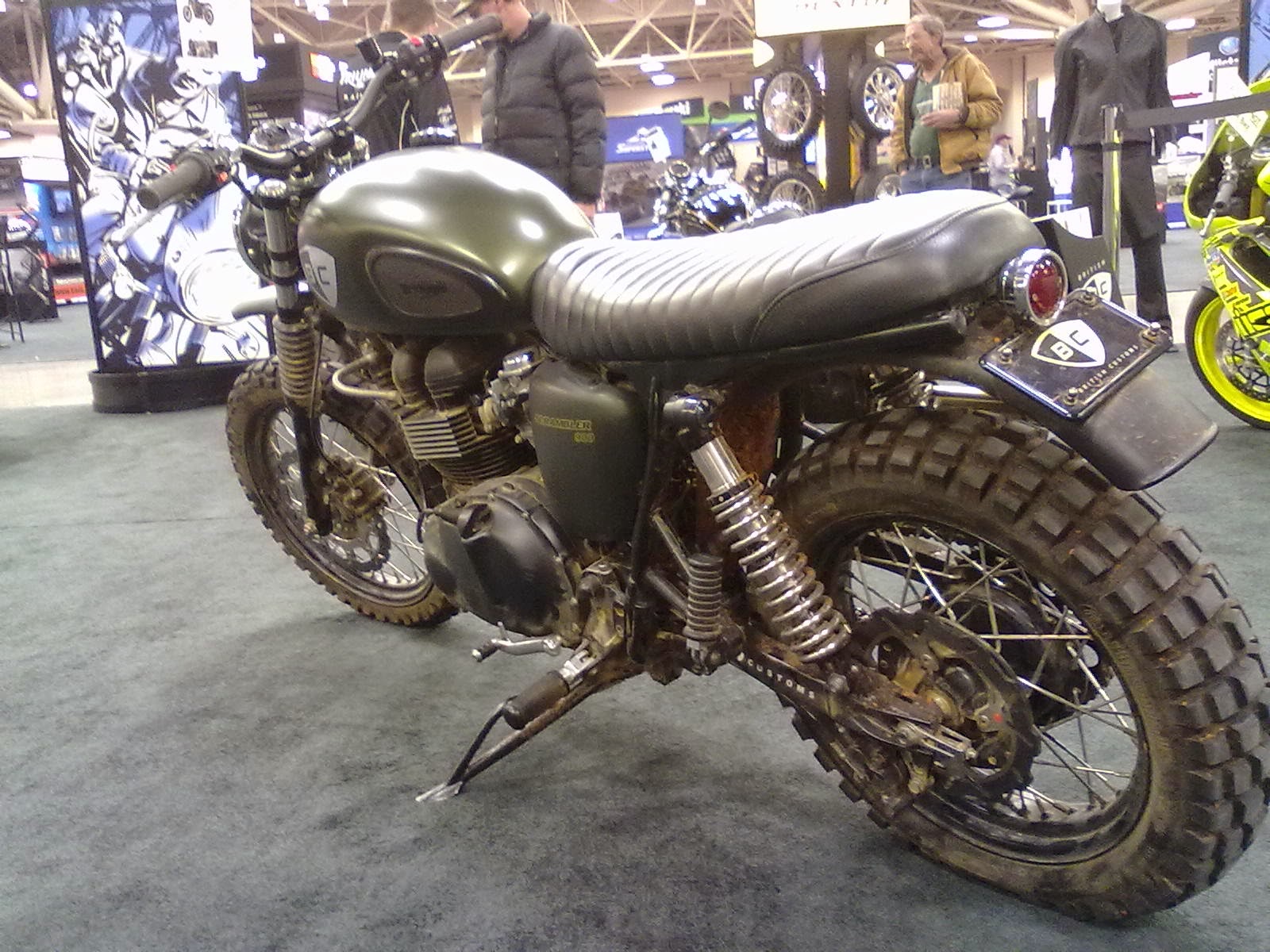 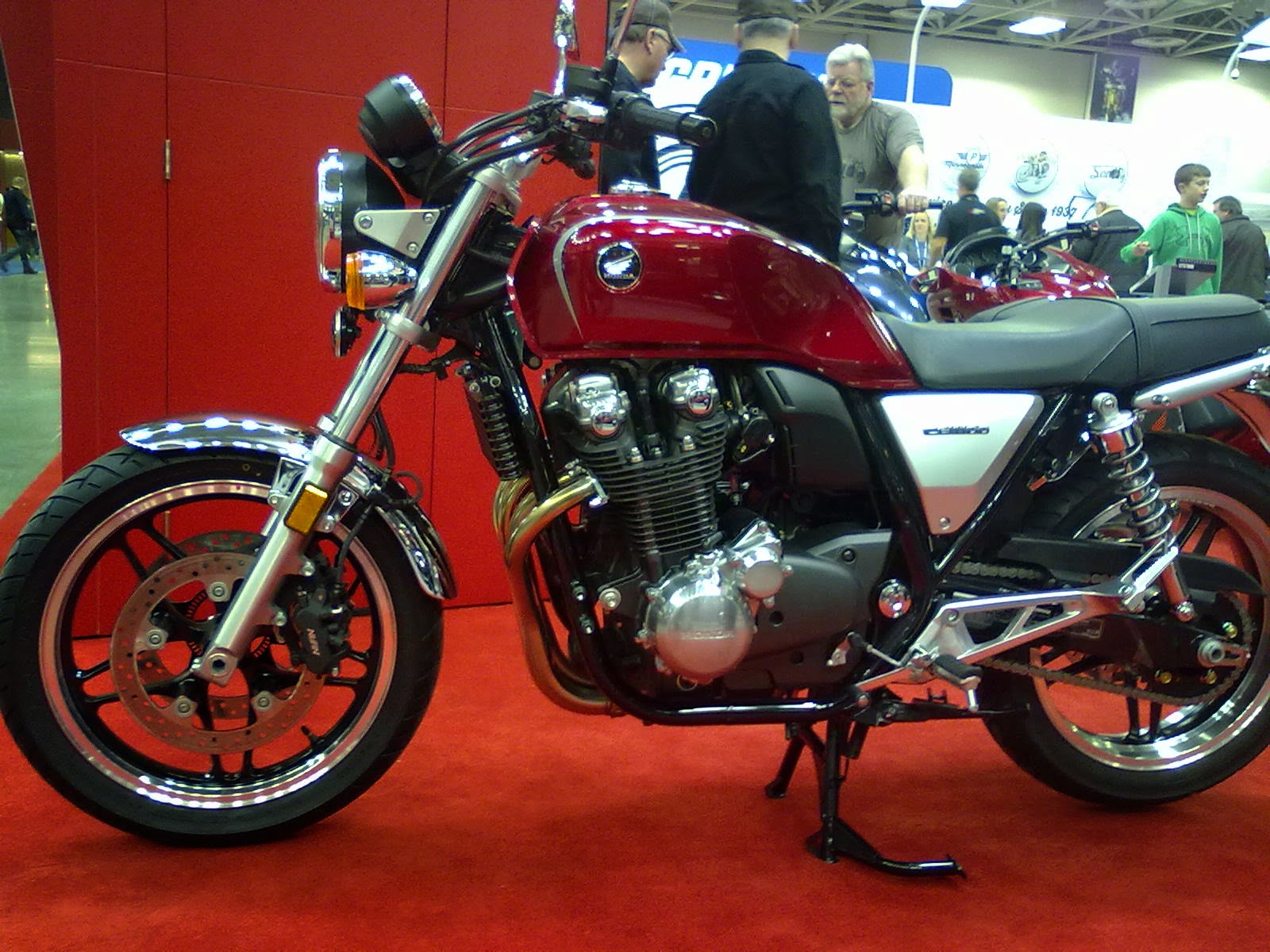 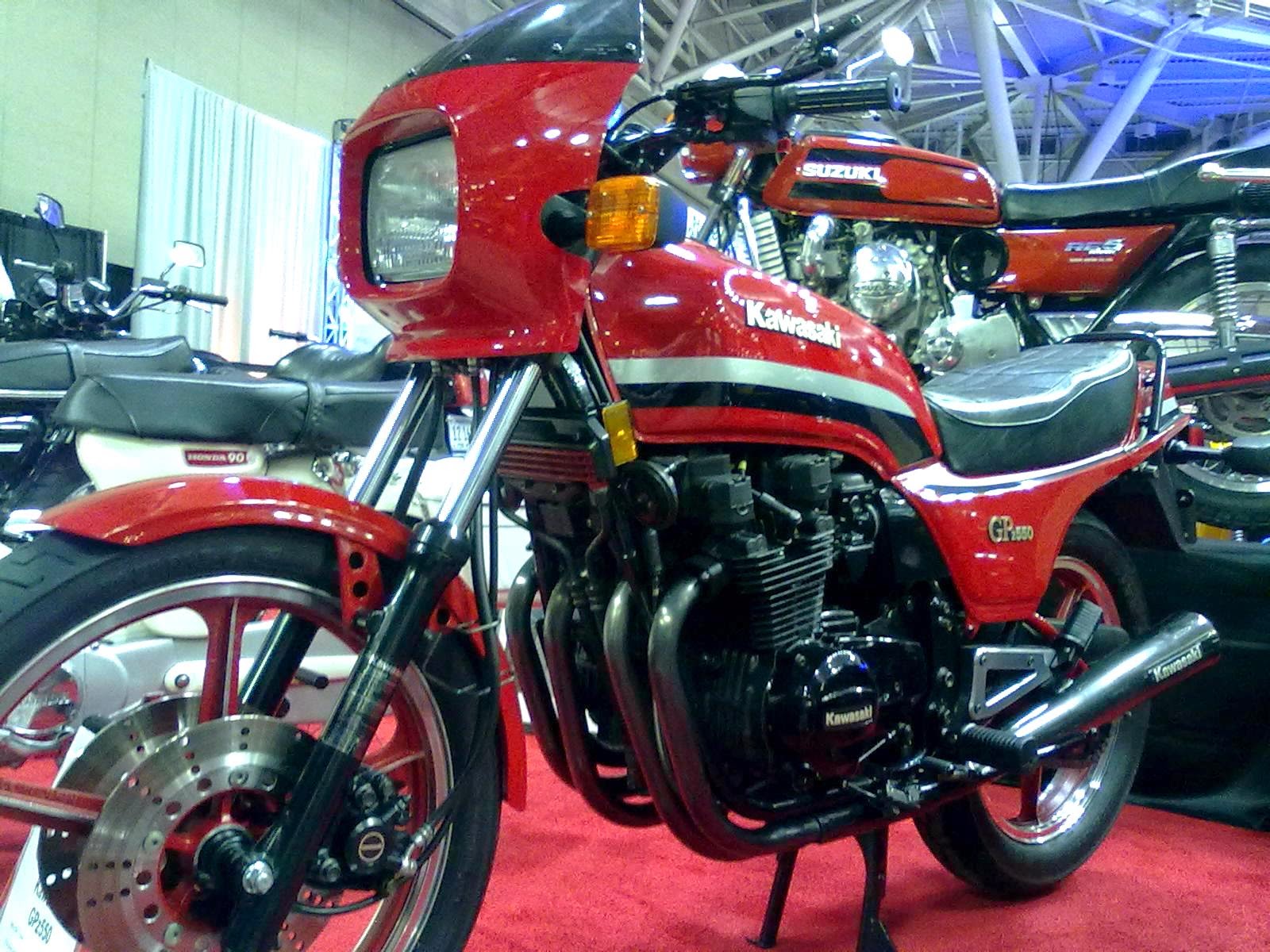 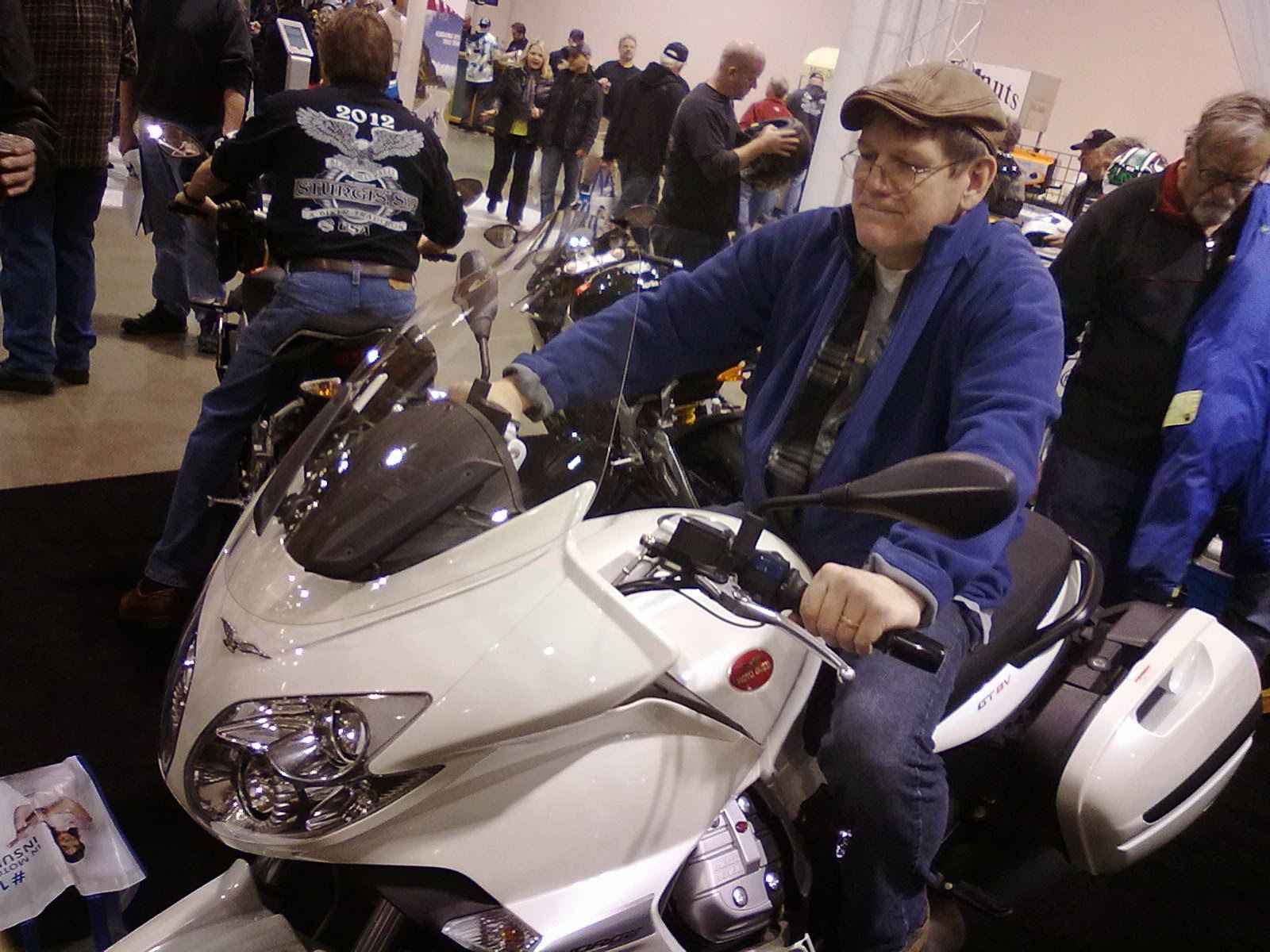 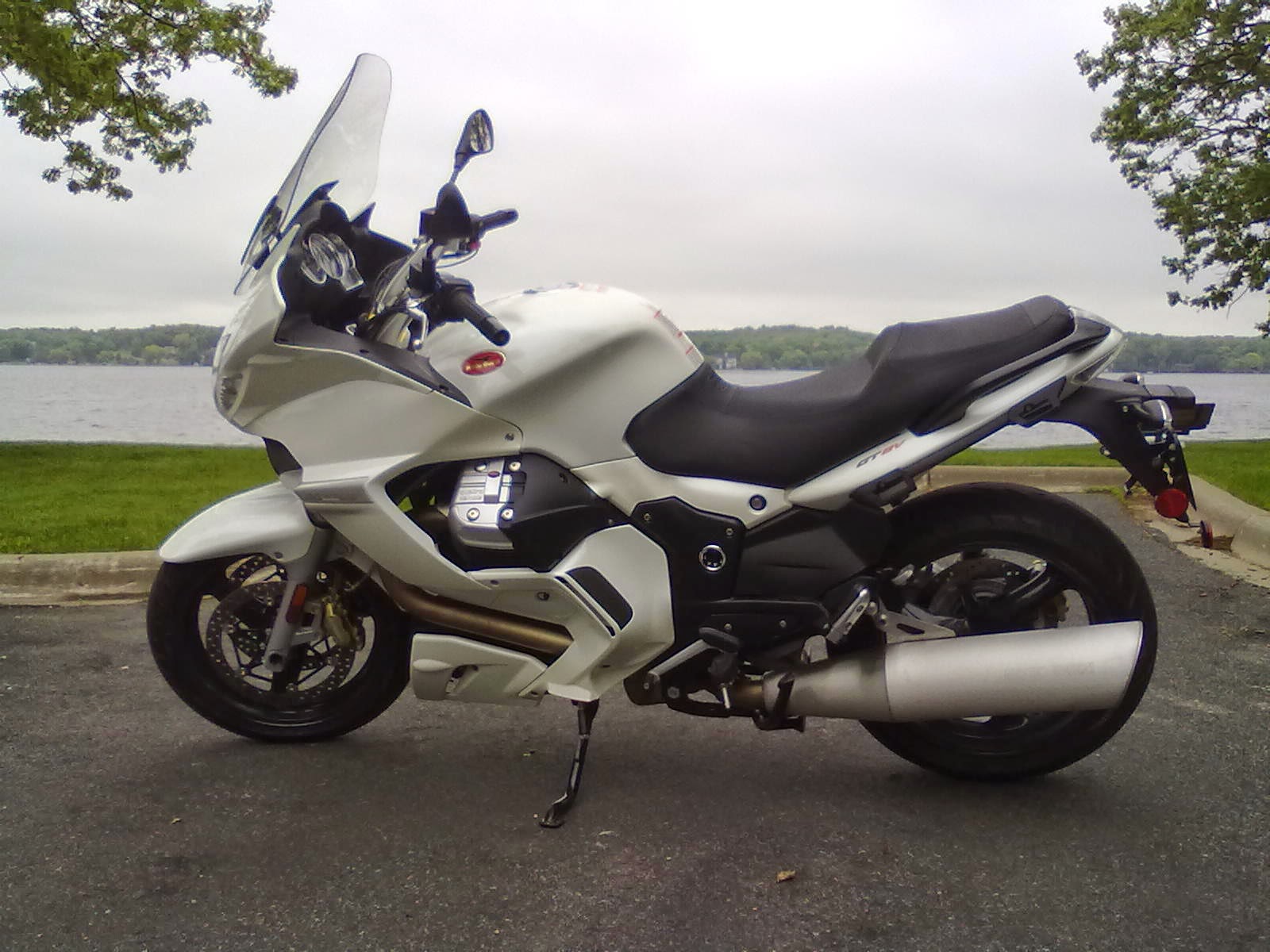 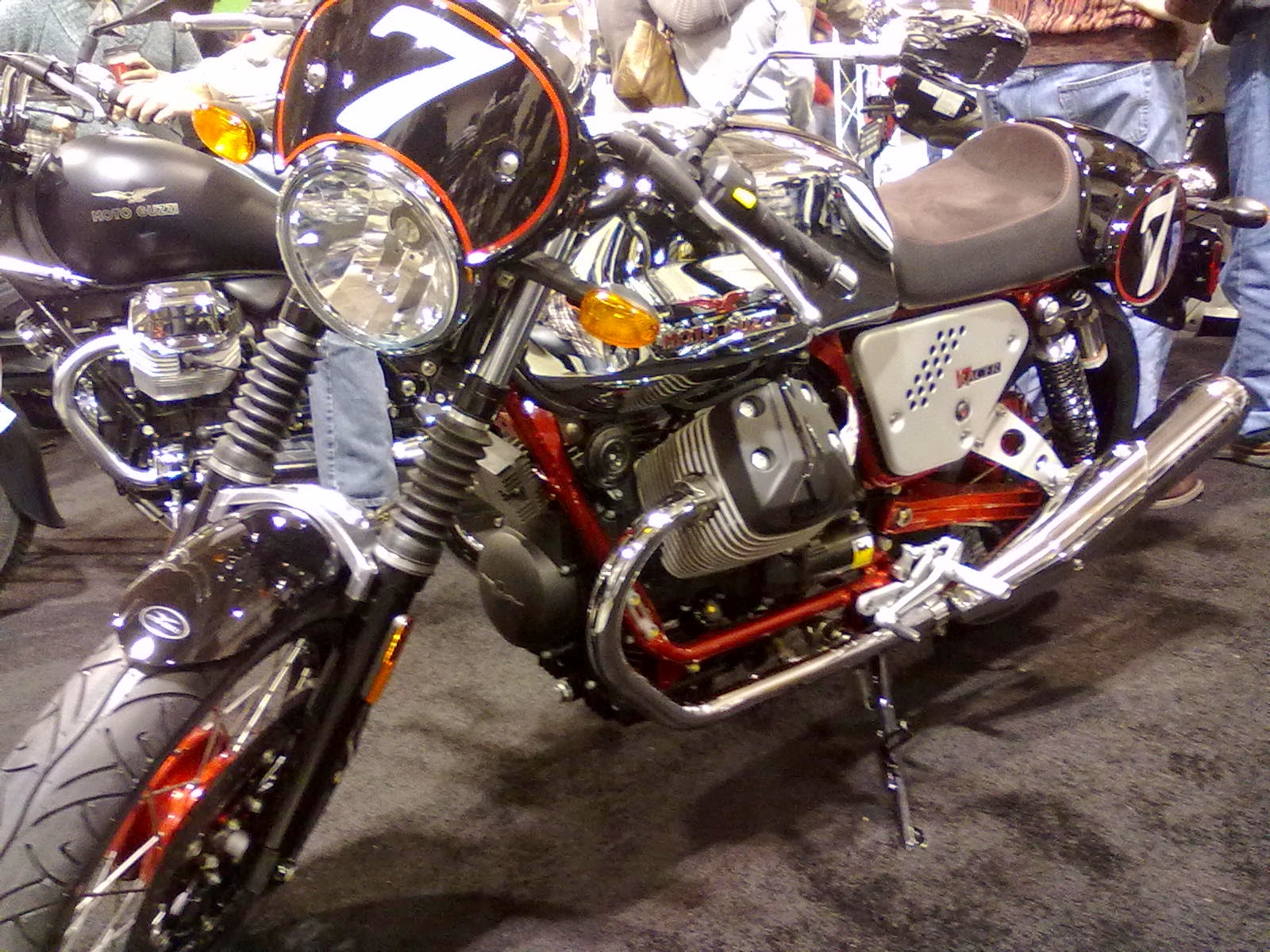 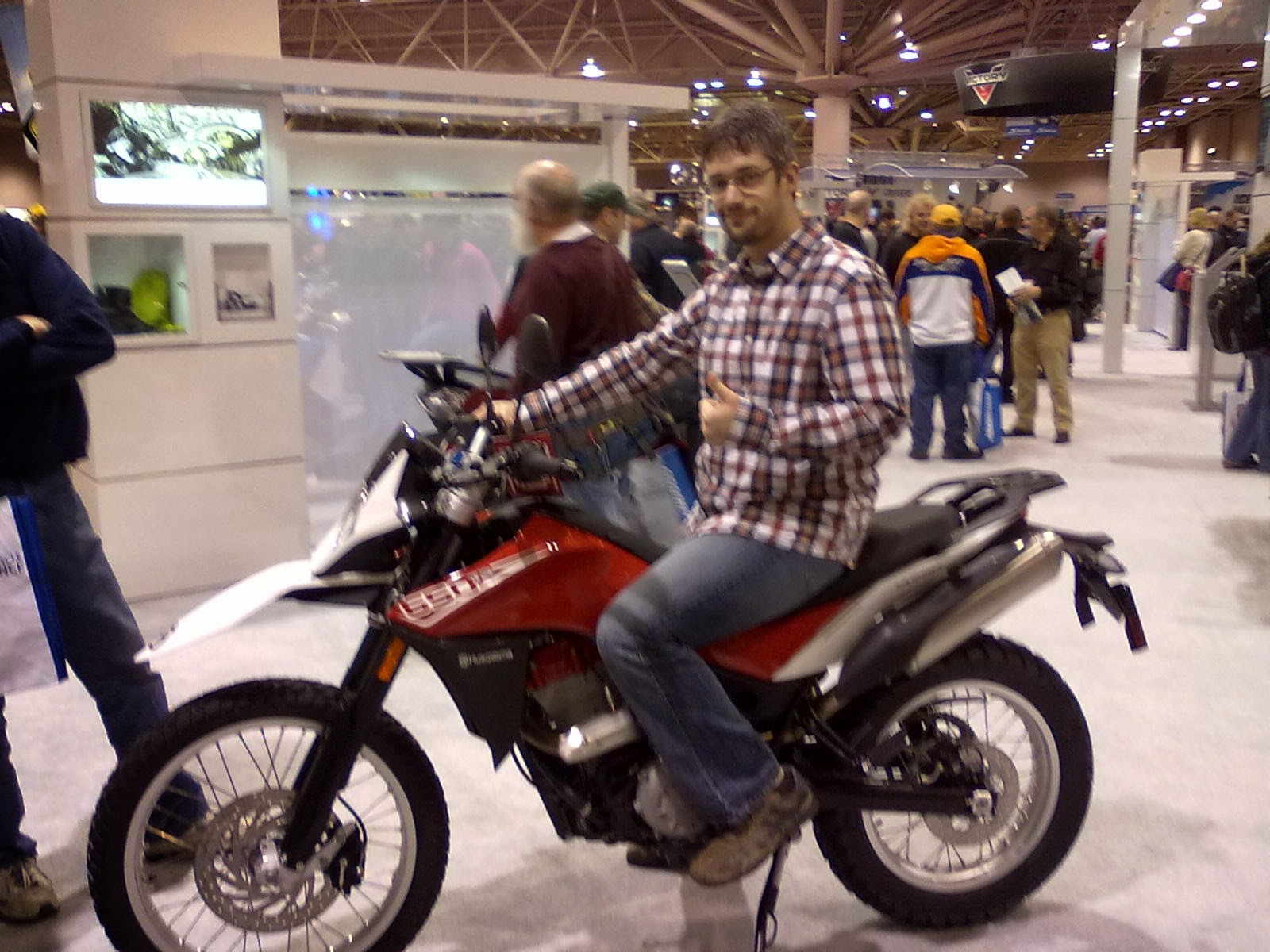 
There comes a time in a relationship when you decide to go all in. The brief excursions are going really well. Things are new and exciting, easy and enjoyable. You mesh. You may have spent some quality time out on the town or just hanging out in the garage. And then it happens, an opportunity crops up that you just can't pass on, an opportunity that may lead to new possibilities or leave you stranded and alone. 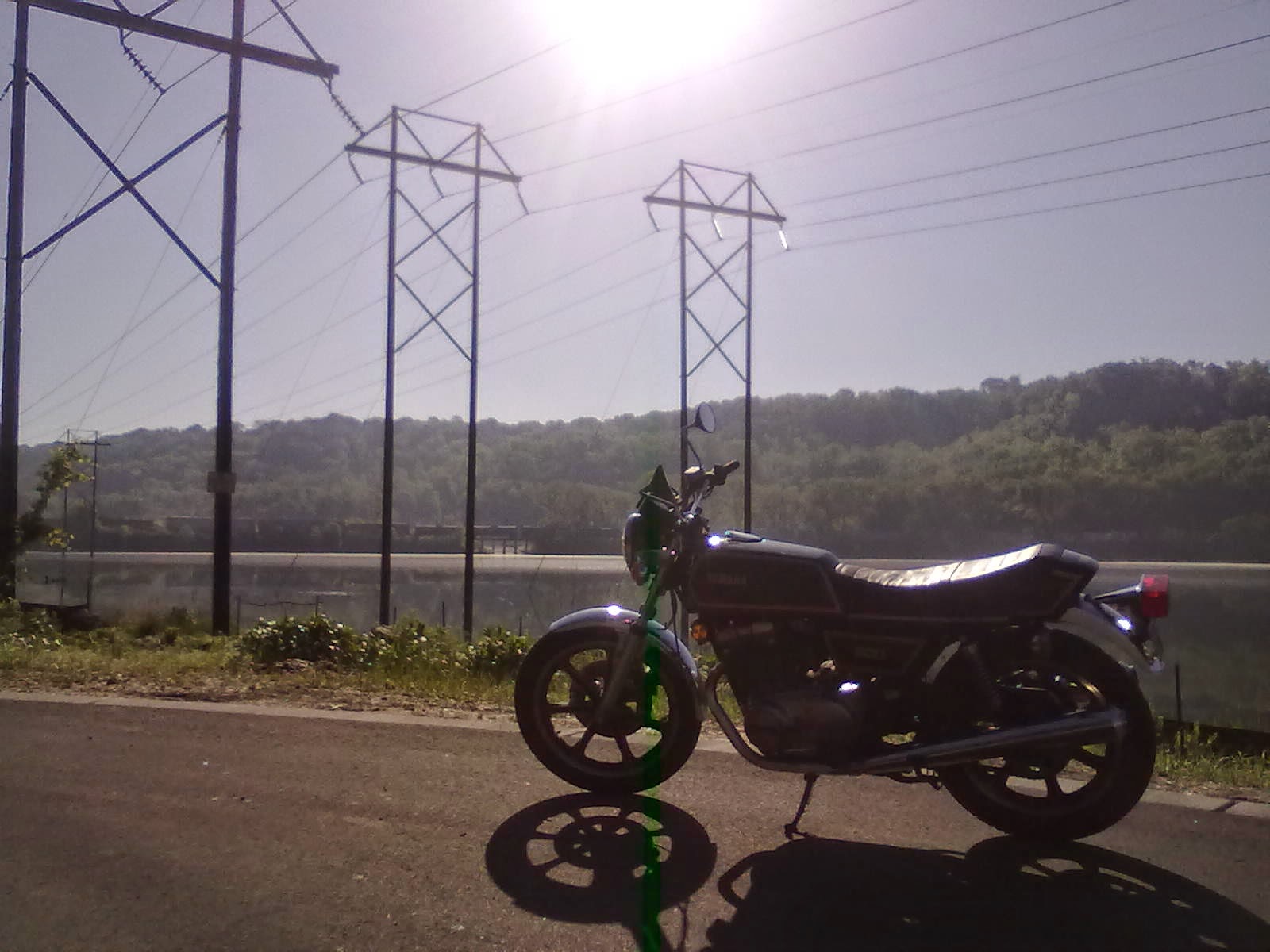 Taking possession of a 34 year old new-to-you motorcycle can involve a prolonged getting to know you period. I spent a year sorting out little issues, taking consecutively longer and faster rides. First on my maintenance list was the brakes, then: tires, chains, oil, valves and miscellaneous bolt tightening. A good degreasing will keep an air-cooled bike cool, although there's a theory that the grease holds things together.

I ran into some possible overheating issues on a test run at a sustained 65-70  mph. After I cleaned up the gunk that has accumulated over the years, I opened up the valve cover to see what I was dealing with. To my surprise the XS500 has rocker arms with a screw and lock-nut style valve adjustments. I got out the feeler gauge and found that the valve clearances were way too tight. While loose valves are noisy, tight valves break things.

I got back into test and fix cycle over the next few weeks. It was all going fine until I got the call from my old man. 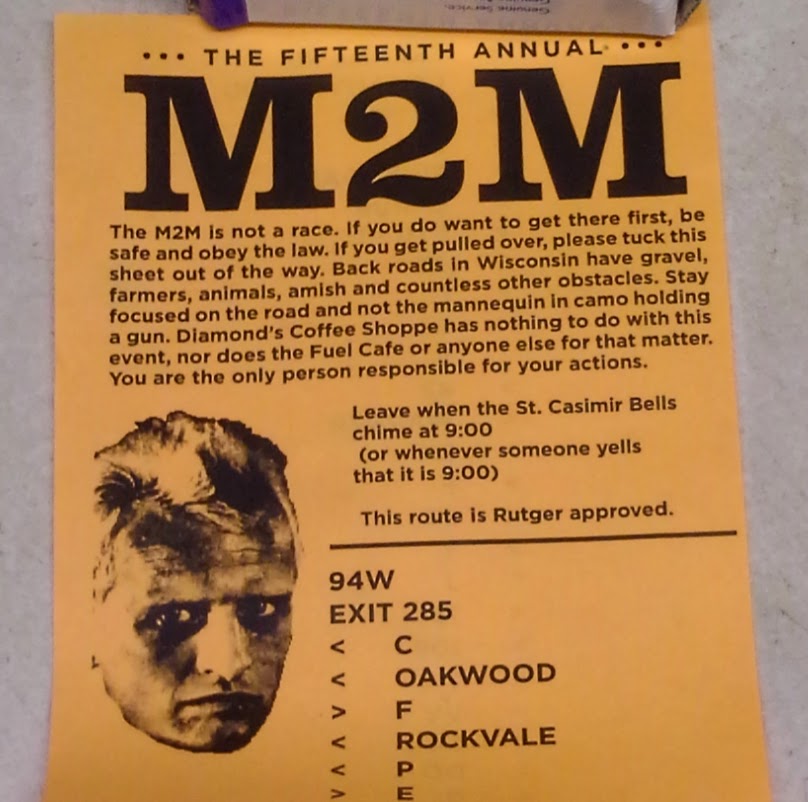 It was a humid 90 degrees when I set out for La Crosse. The first leg of the trip crossed the same stretch of pavement where I encountered the overheating problems. It was sink or swim time for the little XS and I. Thirty minutes of Talladega, Three wide. Hammer down. With the little crank spinning at 5000 RPM, the balance shaft did it's job, keeping things smooth and confident. A quick roll on the throttle sent me forward with out hesitation. "All is well good buddy."

I had three hours to get from St Paul to La Crosse where I would be meeting my dad on his way up from Milwaukee. This didn't leave much time for stopping or mechanical issues. Our plan was either going to work, putting us both on the X at the same time, or we would be playing phone tag in the land of poor service.

At the hour and a half mark I found myself cursing down the east side of the Mississippi at a leisurely 60 miles per hour. This was going to work. 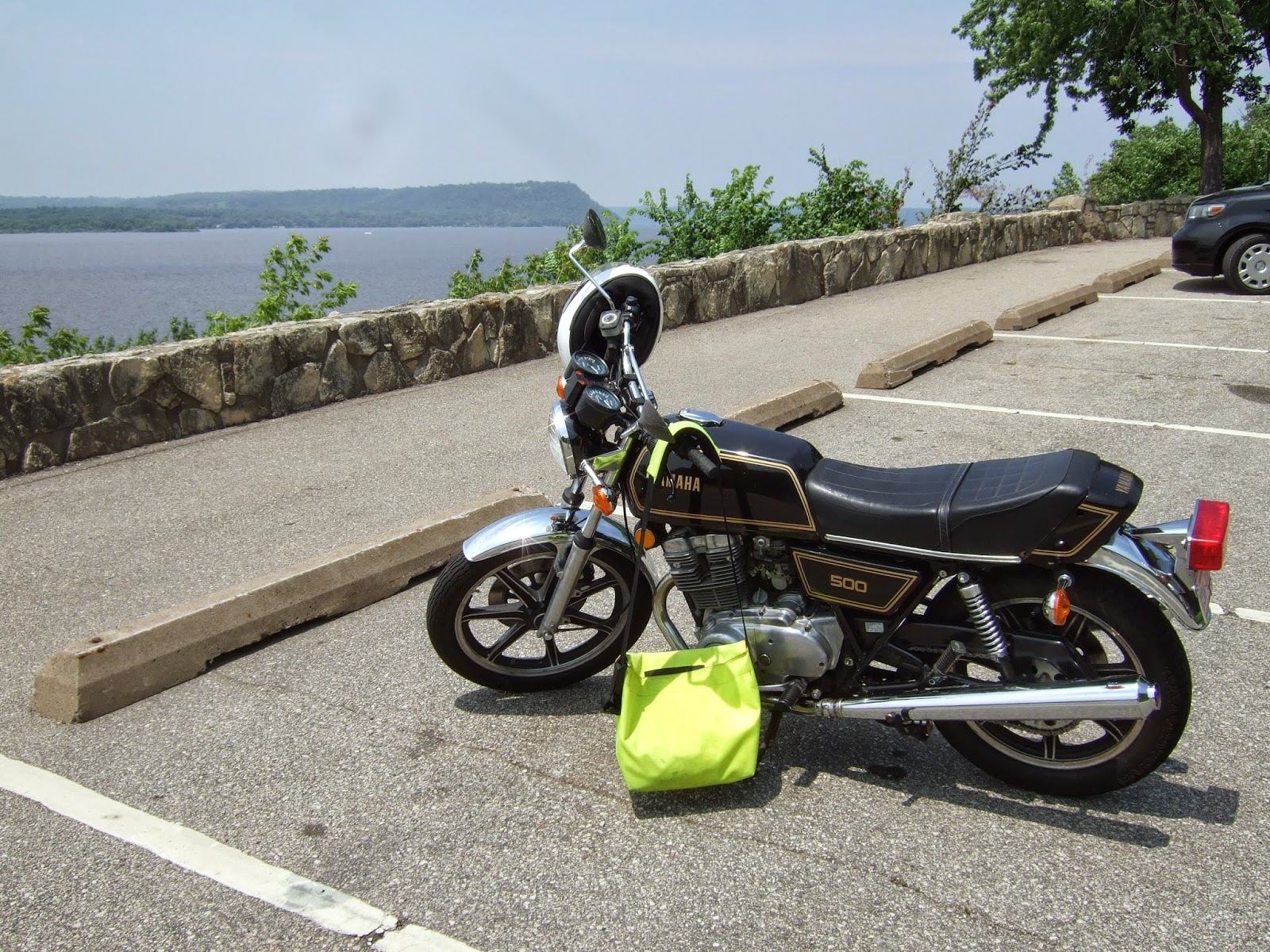 My first stop was a Lake Pepin. A quick walk around told me that the chain was tight and I had air in the tires. In a moment, pushing the starter button would tell me just how much the heat and pace had affected things. We shared a silent moment, took a few snapshots and set out on our way. Push. Spin. Combustion. Idle. "What's next boss?" 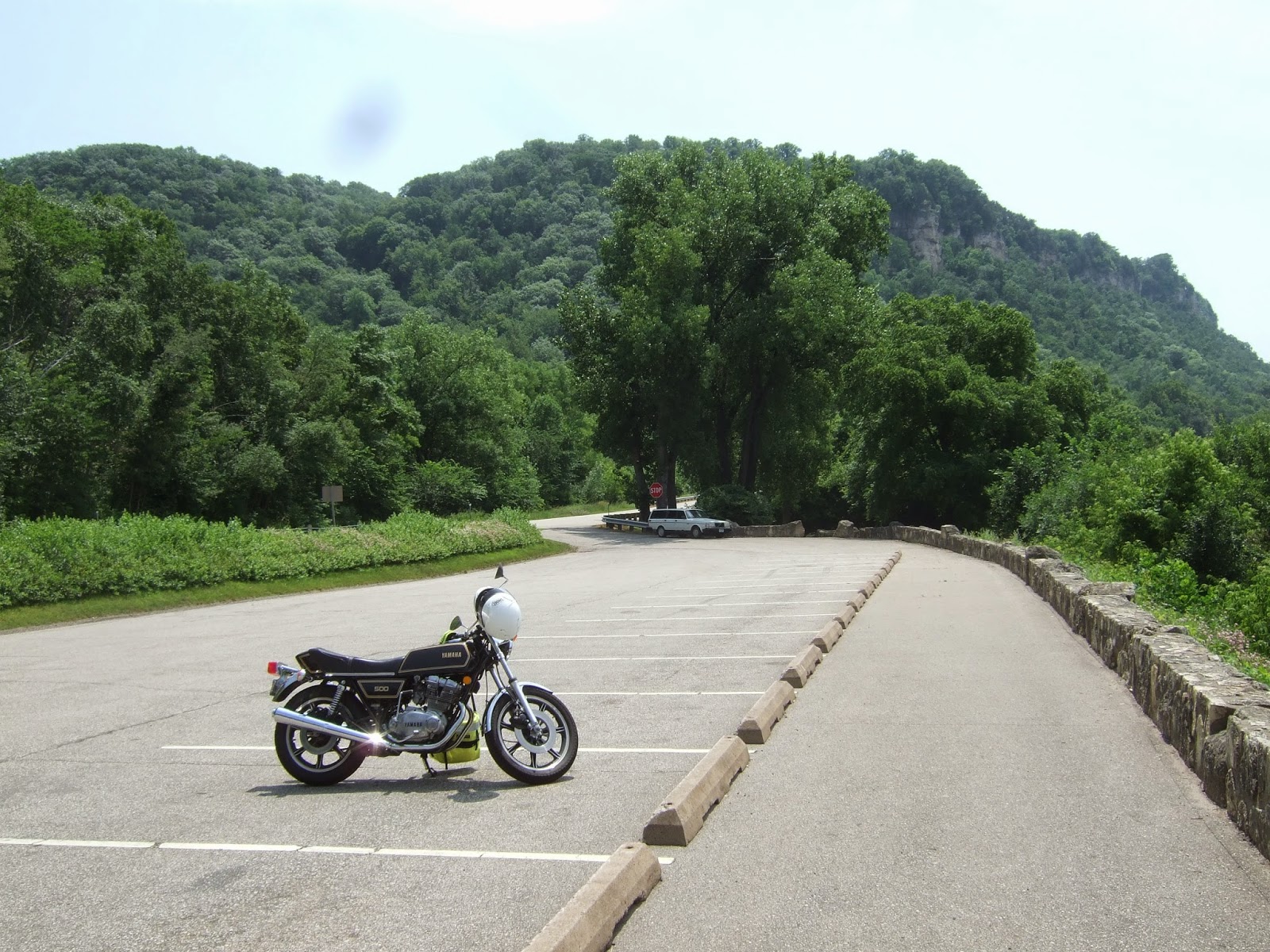 The thing about the M2M route is that nobody knows what it is until the day of the event. The two most popular riding roads in Wisconsin are just north and just south of La Crosse. I put my money on highway 108, just north of town. A quick check of my phone told me I was a winner. From Lake Pepin I rode directly to the Mindoro cut. 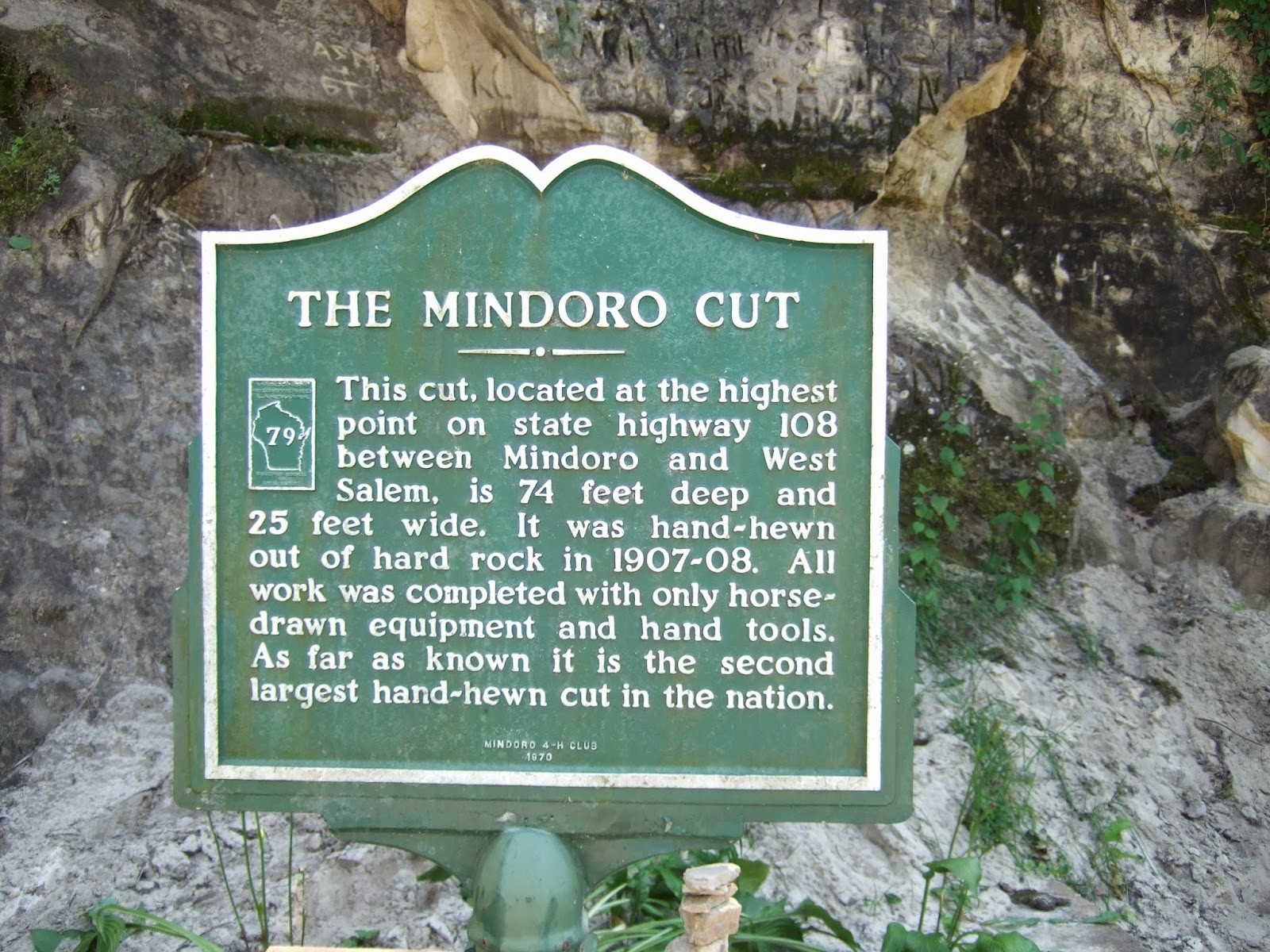 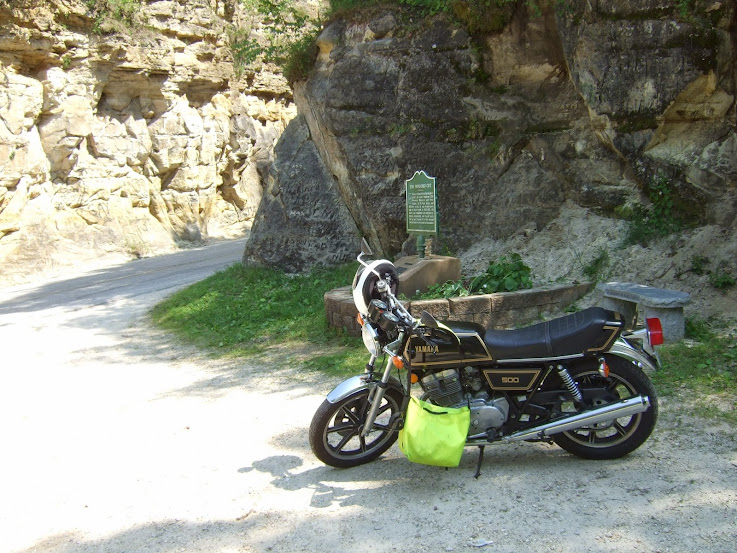 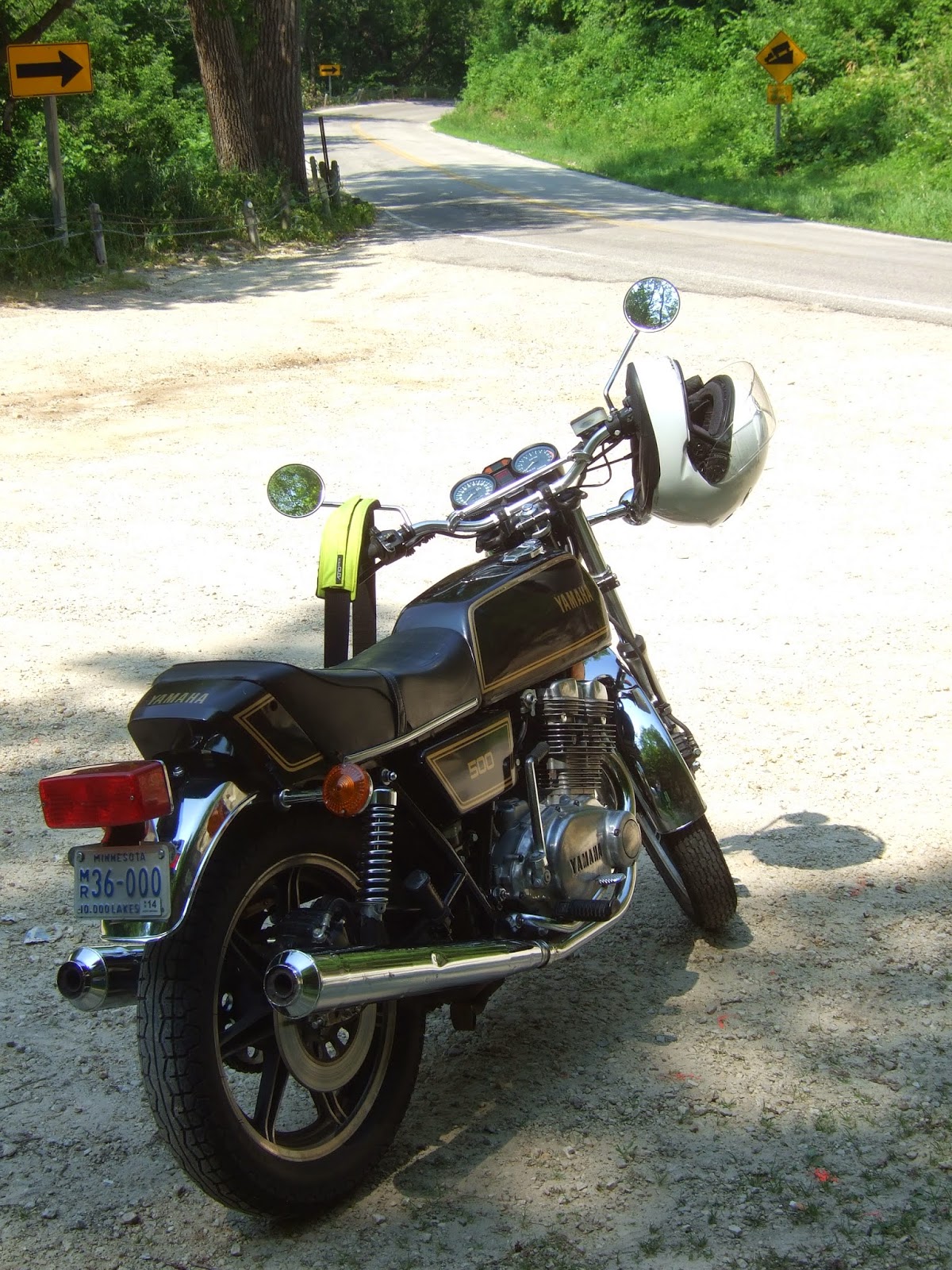 I arrived at the turnout a half hour later than I wanted and saw no sign of pops. I knew my phone was useless because he'd be riding. All I could count on was Pops coming over this pass at some point in the ride. If I missed him he would have stopped at the bar for lunch, but I didn't see anyone there.  So I took a walk, knowing that he would see my bike.

All kinds of thing go through your head while you’re waiting for a riding partner. You have to be practical. Give it fifteen or twenty minutes before you start assessing the possibilities. He’s an experienced rider riding familiar roads so the worst case scenario gets kicked to the end of the line. He is riding a 37 year old motorcycle so a mechanical issue could be a real possibility, another is that the route is long and he still riding. No call and no M2M groups told me that he’s probably still riding.

Getting tired of waiting, I rode back to the bar to see if anyone was there. Not seeing anyone I set off for the south side of the cut, figuring that I may pass him as I rode south. Also, there’s a park on the south side where I could wait. A change of scenery would be good.

I made it to the park without seeing anyone. Dozing on a shady picnic table, I watched the clouds and kept an eye or an ear on the road. It was after one o’clock when I started to hear them. The unbaffled engine braking of European and Japanese two and four cylinder motorcycles. First a group of three, then four, the one. And just like that, Pops rolled by and there I was on the M2M.

We stopped in Mondoro for lunch and I learned this was the first break he took since heading out at 9:00. Both the CB and XS were holding up well although the CB's rearsets and thinly padded seat would start causing issues later in the day.


Rooster's rules of the road -

I met my doppelganger at a four way intersection the other day. We saw each other. For a moment, neither of us knew what to do. We stopped, inched forward and stopped again in unison, caught in a loop of mutual indecision.Then someone in a Tahoe cut through the tension and we continued on our separate ways. He's still out there somewhere just driving around.
Posted by Jason at 12:06 PM No comments:

New tools for making maps on the web

To know a motorcyclist is to know someone who can stare at maps for what may seem like an unhealthy duration. Those who become afflicted with the map bug may choose to seek a map fix in their professional lives as well, if you’re not careful map making can turn into a full time gig.

People pay me to make maps. It’s not always as fun as it sounds, but sometimes it is.

ArcGIS Online is a suite of tools used by cartographers to make maps on the web, it does what Google Maps has been doing for a while. While Google excels at giving you directions, ArcGIS Online excels at making pretty maps.

Once you have your pretty map you can wrap it in a pretty application, share it on social media or embed it in a webpage. All of this map making goodness and 2GB of storage can be yours for free by signing up for a public account.

My co-worker and I put together a 4 hour class on creating web maps titled “ArcGIS Online: Mapping in the Cloud.” While the class is sure to be captivating, the nuts and bolts of it are covered in the exercises (click to download the MS Word document).

These tools can be used to add maps to your blogs, documents or presentations. While Google does not allow you to embed code (the dynamic map) in Blogger, you can simply add a screenshot and a link to your map. (this is also true for a Google Maps map as far as I can tell)

Someday I'll use the story map application template for a ride report, at the moment the only example I have involves the construction of a new bridge over the St. Croix River.
More Story Maps:
WWII: One Man's War
World Health Organization's Ebola response map
The Age of Humans

Please feel free to leave a comment if you're interested in using ArcGIS Online or have any questions. I'm happy to help out.

About ArcGIS by Esri:

The ArcGIS suite of products are used by cartographers, urban planners, geologists, utilities managers and natural resource managers to create maps and perform complex analysis of spatial patterns. For example I could calculate the ratio of road’s length to distance traveled, a number known as sinuosity. I haven’t, but I could build a map where straight roads are pale pink and Deals Gap is dark maroon.