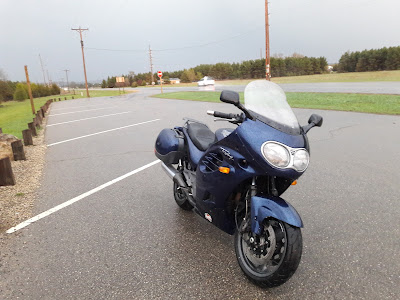 Recently an opportunity to replace it came up which sent me on a bit of a scavenger hunt. I was confident that many bikes would tick all my sport touring boxes. The progress made in twenty years is truly outstanding. But I hit a snag when I crossed two classes of bikes off my list. I’m not looking for a roomier sport bike like a VFR and I’m really not that interested in a bike over 600 pounds or 120 hp. I just don’t need either of those things in my life. What I do need is some weather protection, a lump that’s easy to use around town, and confidence inspiring handling. In those regards, the Trophy finds itself in an elite class.

The old Trophys were much more comfortable than the Sprints that followed them. It will knock out a 5 hour stint on the freeway no problem and can be ridden all day without fatigue. (the Corbin saddle helps) And it’s far less mass than a modern Trophy, which competes more with BMWs K bikes than their RT twin. It’s a cushy sport bike that can truly tour, a combination that seems to be missing from many manufacturers’ lineups.

That’s not to say it has no modern peers, I just expected to find more. So what’s on my radar? First of all, the Moto Guzzi Norge ticks all my boxes and comes with ABS, fuel injection, plenty of torque, and easy going handling that doesn’t mind playing a sport bike on the weekends. The FJR1300 is a proven platform if not a little bigger than I’d like. From what I can tell, it can be a perfectly good commuter. A Versys 1000 would be an absolute blast, upright yet sporty with long legs for soaking up St Paul’s crumbling infrastructure. And of course BMW’s R1200RT or ST if you can find one.

I believe the BMW RT has been a consistent favorite because of its friendly power plant, excellent handling, comfort, and reasonable size. It’s just an effortless bike to use day-to-day that will tour and carve corners. It’s not the fastest bike out there and has its issues (ABS). There’s a reason people put so many miles on them, the bike just makes riding easy. These qualities have been a winning combination for decades.

I really didn’t expect a 20 year old Triumph to keep such good company until I set out on a search to replace it. There are surprisingly few motorbikes out there that inspire me to go through the hassle of selling, buying, and dialing in a new bike. Don’t get me wrong, it has 20 year old bike problems: some of the rubber components needed replacement, it has carburetors (which is a non-issue for me), no ABS or traction control, and the bodywork is no longer available from Triumph (most other parts are still available).

I rode the Trophy to work this morning, cool temps and a light drizzle. A proper English commute. It felt right at home.

No new bike for me yet but you never know when inspiration will strike.