Seven Mile Creek park is about halfway between Saint Peter and Mankato on US highway 169. The "crick" is a beautiful little stream that comes down out of the Minnesota River's high bluffs. The park has hiking trails to explore and grills for cooking, all of which were being used on this warm spring evening. The portion of the park across the road provides access to the Minnesota River. Like south east Minnesota, the rivers here are extremely low. Without some rain, we may be looking at a drought year. 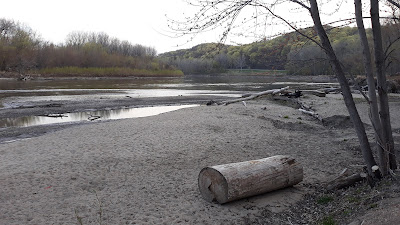 A good sitting spot on the Minnesota River.
In a normal spring, this would be under many feet of water. 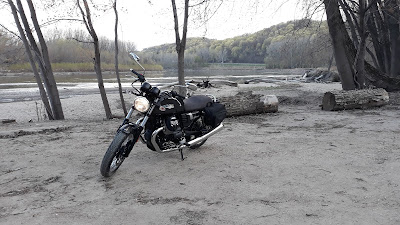 The V7 is getting a workout this spring. 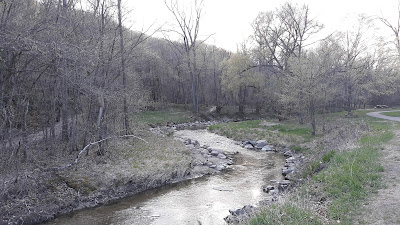 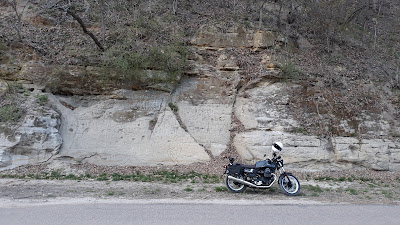 Saint Peter sandstone, some of the finest anywhere in the world.
It's also known as frac-sand. 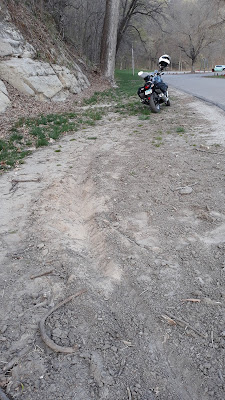 The V7 and I celebrated Earth Day a little too enthusiastically.
It was a full tip over onto what looked like solid ground.
(zero damage to the bike or my pride) 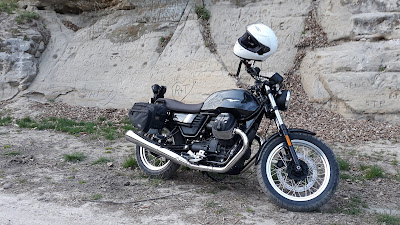 Still purdy as ever.
The V7 goes in for its 600 mile service next week. This ride bumped the odometer up from 370 miles to 550 miles and was the first ride to break the 2 hour mark. It was very comfortable at 70 mph, the motor just humms along at about 4k rpm. The seat kept me cozy for the duration. The ergonomics weren't too bad, it's a sharper bend at the hips than my Norge and my feet are forward. It does the "sportster trick," where you move your feet to the passenger pegs for a more aerodynamic riding position. When you're putting the miles in, it's good to have options.
Overall, I'm very happy with the bike, it does everything I want it to do.
- Ride North
April 22nd | 64 - 55f | 180 mi. | 6:00 - 9:00 PM

Our annual trout opener fishing weekend is in the book, or the blog anyway. It was cold and windy, and we were missing a few people. My father-in-law has been taking this trip with his buddies for 30 years but for various health reasons, it was just him and I this year. These guys have been taking 3 or 4 annual fishing trips every year for three decades, their absence was felt. The June trip to Lake of the Woods should be better attended and less physically demanding than climbing up and down these hills in search or trout. 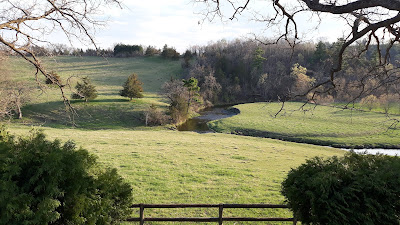 The evening view from our shack,
we could see trout rising in the riffle. 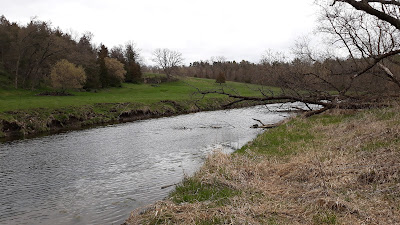 Spring is just starting poke up through the detritus.
We fished private land outside of Preston. The farmer is 88 years old, he's happy to chat with us and the turkey hunters who visit him. We got a bit of the family history and some stories from when he was in the marines in the 50s. Around lunch time he came down to the stream to visit us. He and his son-in-law, who was very busy, birthed two calves that morning, one needed some work to get on its feat. Super nice guy, it was good to visit with him again. 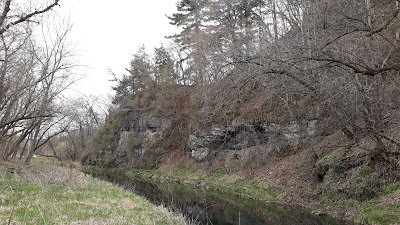 In the above picture, the river runs into a bluff.
This is the view from the valley floor. 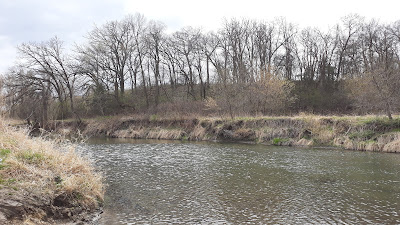 The trout were sporadically rising to bugs that I couldn't see.
The cold weather put an end to what was a glorious caddis hatch. All my fish came on a partridge and green wet fly swung to feeding trout.
These were tough conditions: windy, no real hatch, low rivers, and clear water.
That and the fish had just spent the week gorging on bugs. 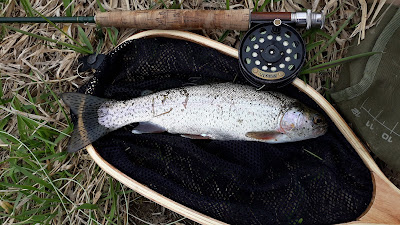 This fish was destined to become dinner.
I talked to one of the DNR fisheries managers, they stocked the stream on Wednesday. I caught this rainbow trout on the following Monday. Its stomach was stuffed full of nothing but caddis fles. It's likely that this fish was one they recently put in.
Many of the streams in south east Minnesota are put-and-take fisheries, there is no documented case of rainbow trout reproducing in south east Minnesota. All the female "bows" the DNR sampled have had no viable eggs. The DNR also stocks brown trout, native to Europe, and brook trout, our native trout. Both brooks and browns reproduce at sustainable levels in Minnesota. 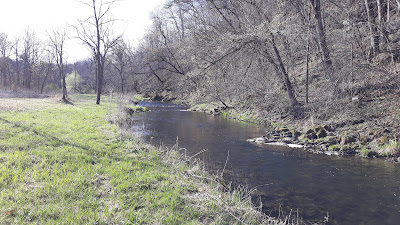 We fished some habitat "improvement" work done by Trout Unlimited. When done wrong it's like fishing an amusement park. This stuff was done right, but even then, I prefer the natural streams. We caught a nice rainbow trout here. After checking in with our DNR friend, we leaned that rainbows were never stocked in this stream, it must have migrated out into the bigger, warmer rivers and found its way into Trout Run. 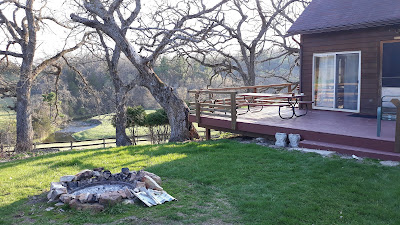 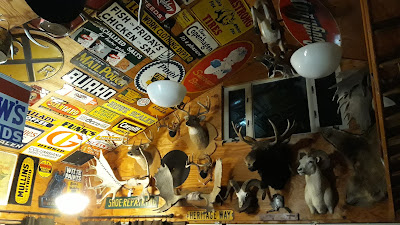 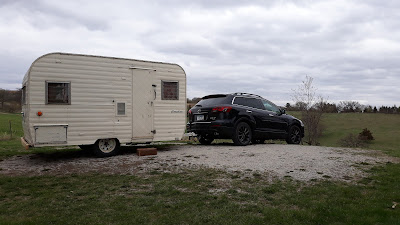 The camper followed us down,
it's now parked at a friend's house waiting for us to disturb the peace.
- Ride North
April 18th - 20th | 45f and windy | 2 dozen trout or so 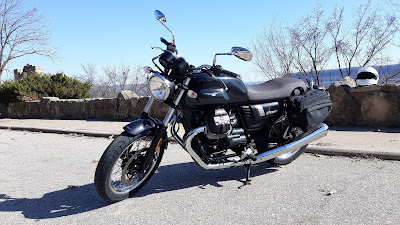 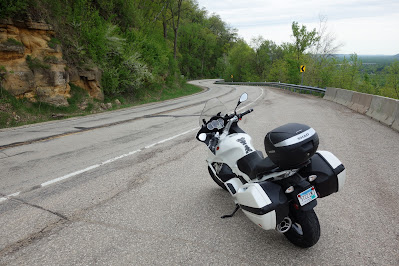 2011 Moto Guzzi Norge, 2019 - 2020
The Norge was my dream bike. Not too heavy, great weather protection, all day comfort, great sounds, and fantastic handling. We've been on many all-day rides through all kinds of weather. It always left me dreaming of epic rides. The kind of rides I'm just not in a position to take at the moment. Someday I'll be on those journeys but these days I'm enjoying exploring the world with my family. 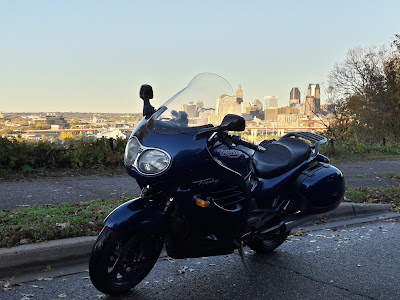 1996 Triumph Trophy 900, 2016 - 2018
The Trophy. This was probably my favorite bike for two reasons. It was extremely capable without being cumbersome. It was old enough that I didn't care if it got dirty, scratched, or broken. I did work on it all the time, but my son was little and I was pretty much a home body anyhow. There is no better bike to ride in the rain than this one. I felt like it was living up to its dreary English heritage. This was the bike I rode on a frozen lake in February and through August storms. 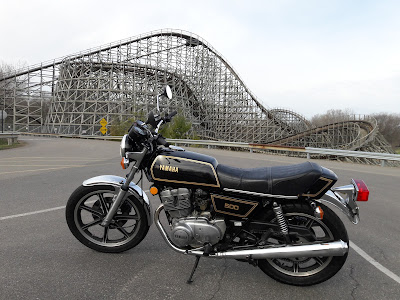 1978 Yamaha 500E, 2012 - present!
A 1978 Yamaha XS500 was the bike I chose to see me through those sleepless and sleepy days of keeping an infant alive. It needed to be cheap and easy to use, its sole job was to give me the occasional break from early fatherhood. I bought this bike in the summer before my son was born and, as it turns out, it's the bike I ride most often. It's the bike I've kept the longest because it's just so easy to use and fun to ride. 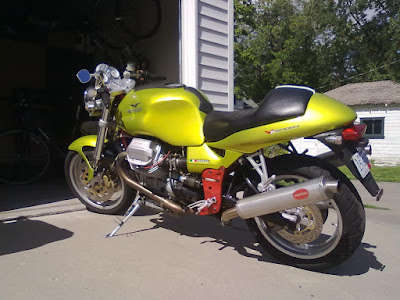 2000 Moto Guzzi V11, 2005 - 2012
A Moto Guzzi V11 with Mistrial exhaust, big, green, fast, and the noises it made! I've never ridden a more exhilarating motorcycle. I was told the previous owner rode in bright red cowboy boots, which suits it. It was love at first sight. By the time it exchanged hands again it travelled over 60K miles, 35K of those were mine. 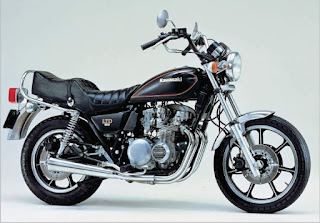 1982 KZ550, 2003 - 2005
It had a lower bar and was rattle-can-satin black.
(before digital photography was common)
Coming off of dirt bikes, the KZ550 was my first road bike. It was purchased from the side of the road for three figures. I was working on my undergraduate and a great many other things too. I took out a loan from the wonderful people at the credit union. That bike only ran when the sun was shining, I had to park it in the sun before it would start. Not the best but it was the start of my street riding career and my credit score. 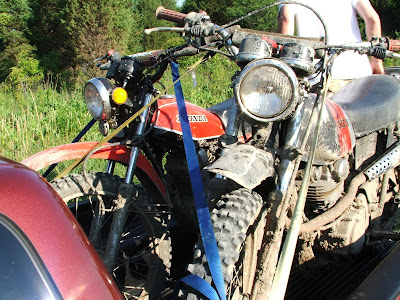 Honda dirt bikes, where it all started! 1997 maybe?
Thanks Dad! 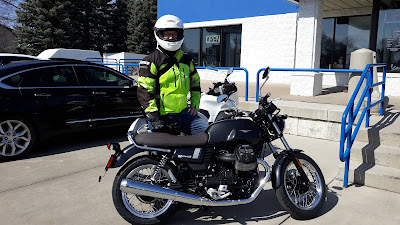 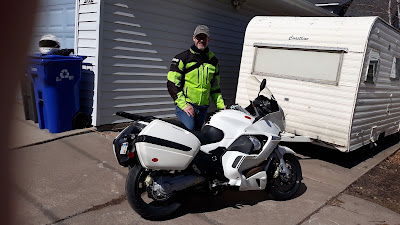 One last photo opp. with the Norge. 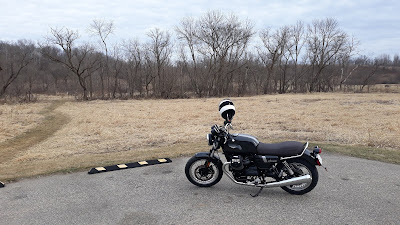 The purchase of the V7 was heavily inspired by my experiences with the XS500, it brings some things to the table that the Yamaha lacks. While the Yamaha will cruise at 70mph no problem, it isn't comfortable there. It has a 55 - 65mph sweet spot in fifth that's fantastic. The V7 is a longer, more stable bike with 6 gears. It will cruise at 80 without a second thought. The ergonomics: seat height, pegs to seat, reach, are almost identical to the XS. The weight is the same too but the power is just a bit more in places. Both bikes handle superbly if not sporty. It's not a sport tourer, it feels slightly more "crusier" than the UJM standard riding position without dipping into HD Sportster territory.
The V7 is not fast at all. It's fast enough to be moderately exciting but that may be overstating things a bit. It was a deliberate decision to get a "slow" bike. I was tempted by a great deal on a 2020 Kawasaki Z900, I had to remind myself the goal was to slow it down. I was looking for a bike where I can use 90% of what it's got and not be breaking too many laws. It's a bike with a purpose. It's ment to relax, explore, unwind, and have fun. I think it will serve its purpose well. 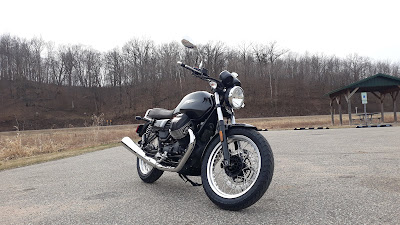