Spring has come early to Minnesota this year and the conditions couldn't be better for early season riding. The roads are dry, the snow has melted and, thanks to a mild snow year, the sand and salt blanketing our roads were at a manageable depth. It was time to give myself and the bike a once over. Time to tap in to some of that muscle memory I've built up over the years.

I took a little time off on Friday afternoon to clean out the cobwebs. It was in the 60s, the sun was shining and I didn't have anything at work that couldn't wait until later. I've been eyeballing the road conditions on some of my regular routes and seeing mostly dry pavement. After the last of the melting (and refreezing) snow has returned to the earth, I pulled the trigger. 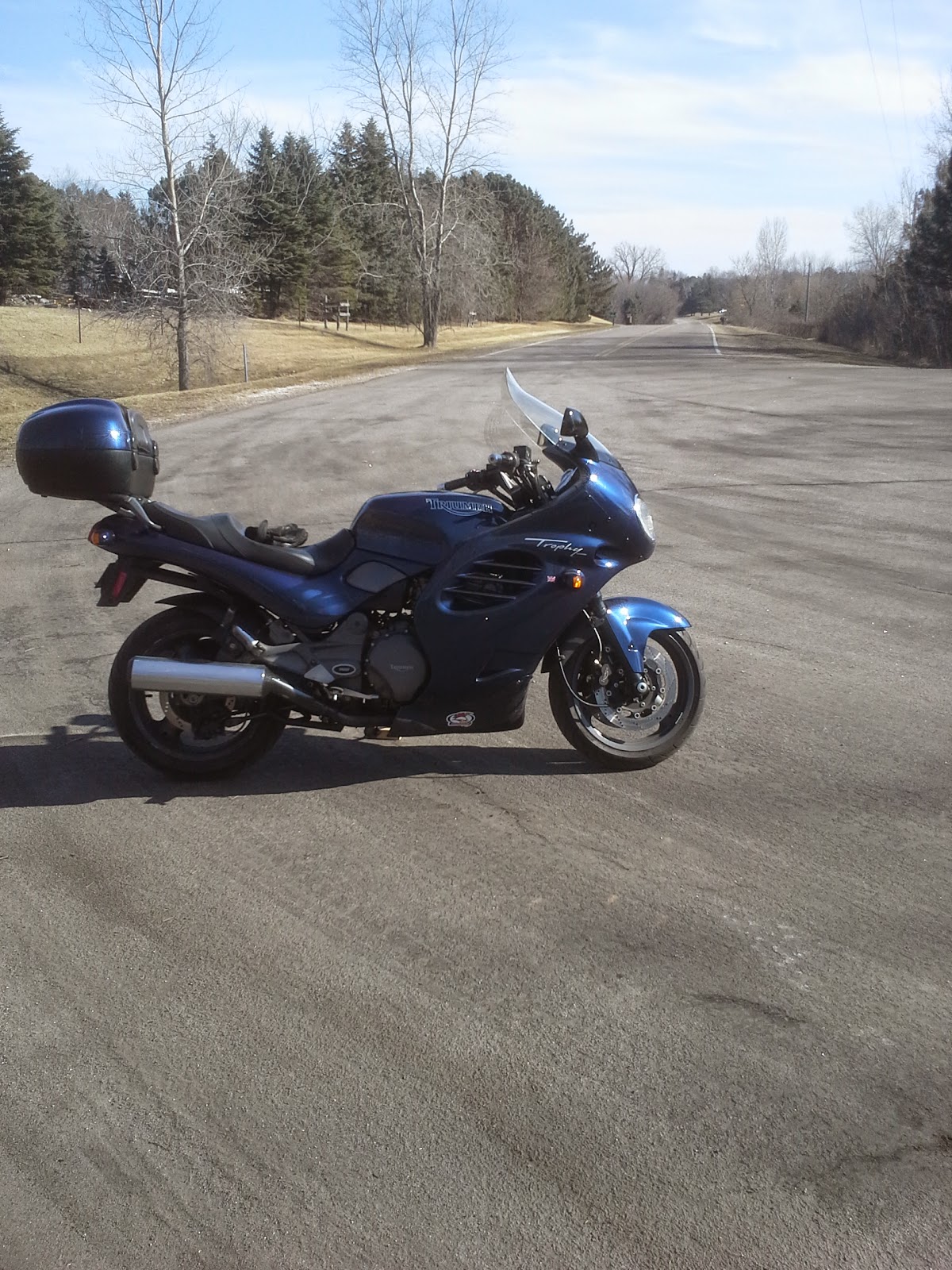 After a short ride down some familiar roads I suck away to a little dead end street. It was the perfect spot to practice a few quick stops and "full lock" figure eights. I picked out a garbage can for my marker and worked on a series of progressively quicker stops from 40 mph. The first one was awful and I missed my downshifts, but it progressively got better.

I don't do a lot of U-turns but do find that practicing slow speed turns helps get my neck muscles back in the swing of things. 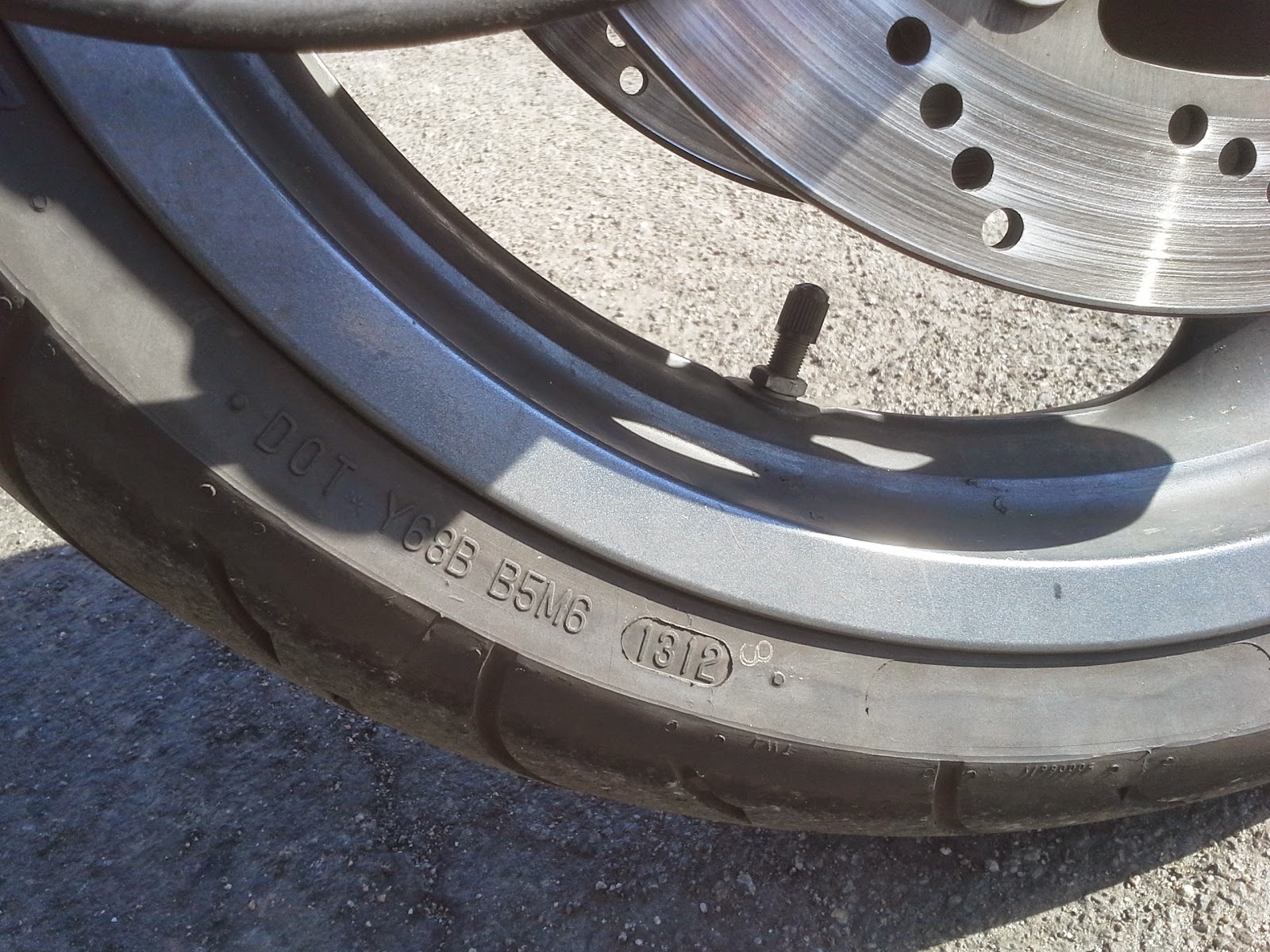 Taking a peak at the tire's manufacture date told me that they were made in the 13th week of 2012. Three years old is probably okay, but four is too many. It may be time to start saving my nickles and do what I can to scrub off what's left of the tread. 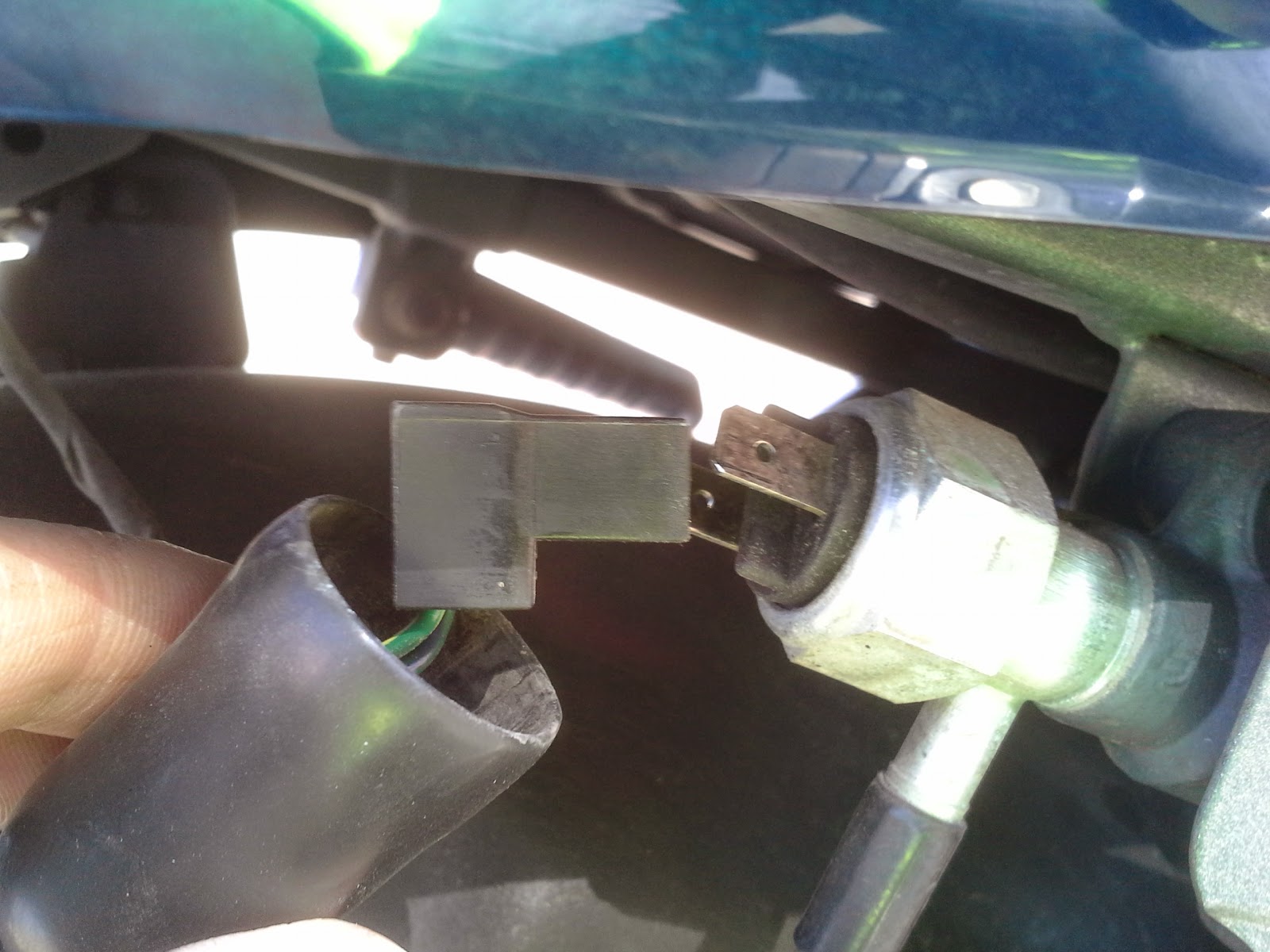 The  gremlins were hard at work this winter. The rear brake wasn't lighting up the brake lite. After some testing I found that the sensor just stays open when the brake is applied.  My guess is that it should act like a switch sending power to the rear brake. 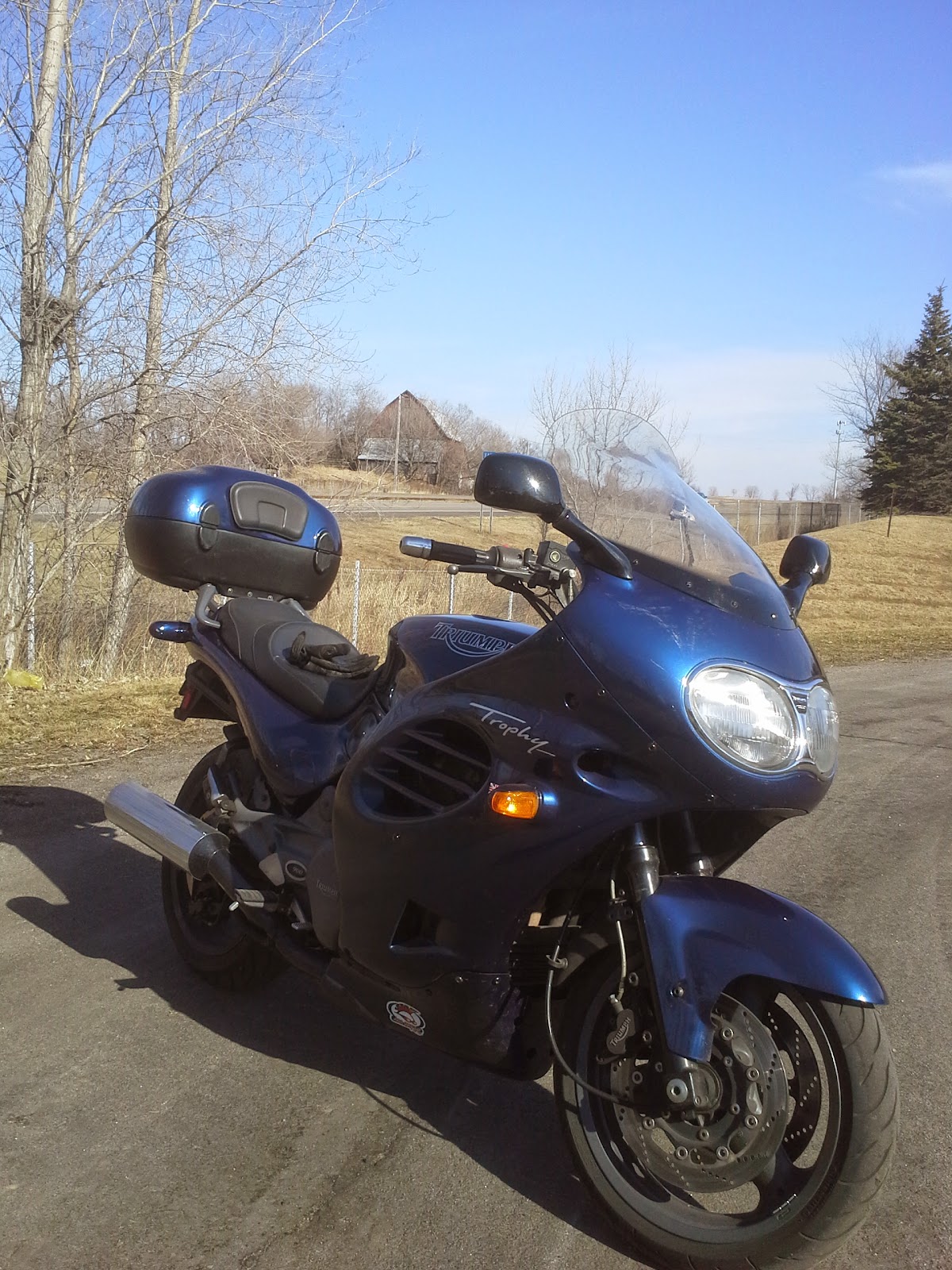 If I've learned anything this winter it's that I need more bike and barn pictures.

It is so good to be back on the road, my family was starting to worry about me. My last riding day of 2014 was on election day, 20 weeks ago. While that may sound like eternity to some, it's probably my personal record for the shortest winter break ever.

Bikes that go to eleven

Like hair bands in the 80's, you've got to be faster and louder than the next guy. But just how fast is fast and what's the best way to measure fast?

Horsepower numbers can be all over the place and spark the never-ending debate about horsepower vs. torque. (horsepower is just a measure of how quickly torque is made) That aside, raw power numbers leave many important variables off the table. How much does this thing weigh? How much power does it make at the most common engine speeds, how much time is spent getting from idle to red line?

Time for an old standby, quarter mile times. How fast can any given vehicle travel a set distance. Speed around a track is perhaps a more interesting question, but it has many more variables and it falls short in two important areas. First, I couldn't find data, not that I looked too hard. Second, it doesn't do comparisons between 2 and 4 wheels very well, which is where the real fun is at.

To answer the $20K question, are you faster than a Mini Cooper S? Well, if you ride a motorcycle the answer is yes. To be fair, I can't guarantee that all these data are good. (see citations below) Also, rider, bike, track, temperature, tire combinations can account for whole seconds, plus or minus. That being said, it's clear that an 883 Sportster is faster than a Porsche Boxster. 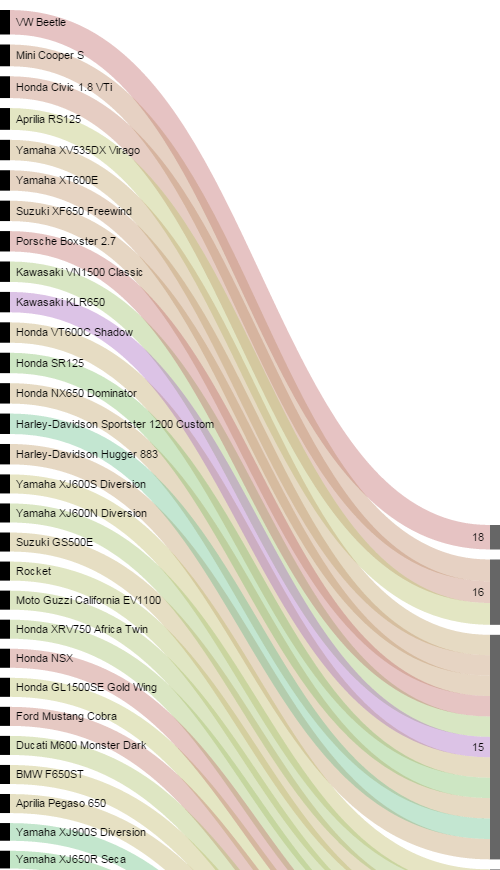 But are you faster than a Mustang Cobra? Probably. 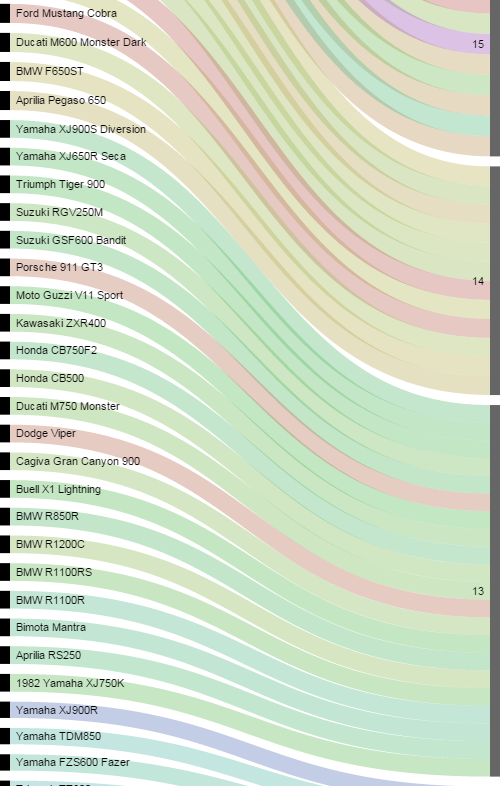 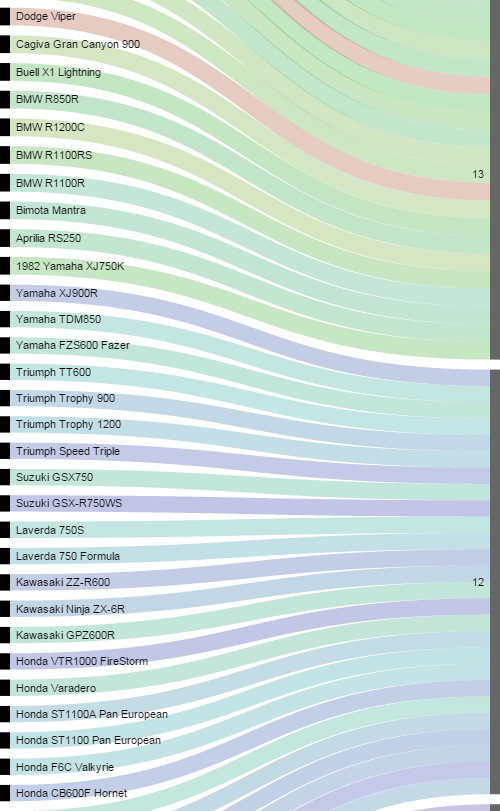 Can you spot the super car hiding in this sea of sport bikes?

We all know that if it's on the web it must be true. If you have a better source for quarter mile times please let me know. If something looks wildly inaccurate please let me know that too. In full disclosure: I grabbed these data to test drive a new data visualization tool and I can't claim that a ton of rigor was put into fact checking, although I did crosscheck a few bikes and cars. 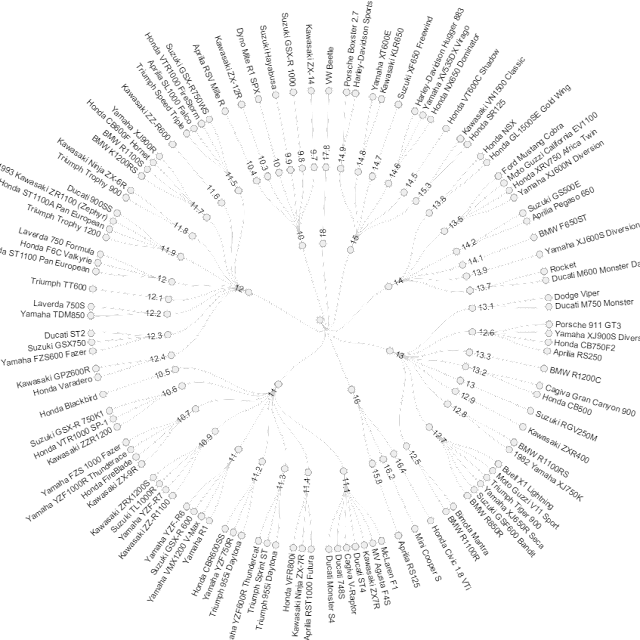